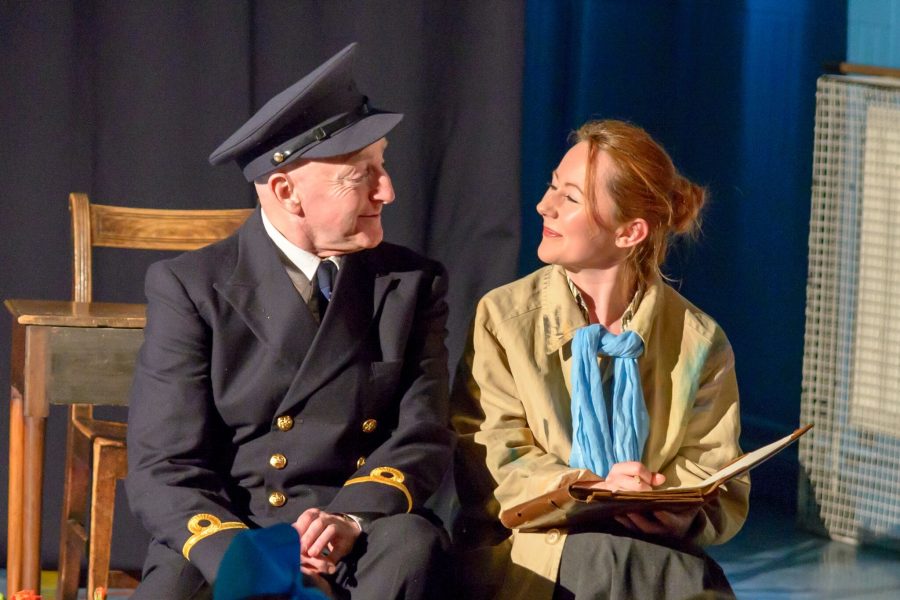 Andrea McKenzie as Eva and Charles Donnelly as Norman Wilkinson

Stories of the Sea

Another cheering evening of Leith history in the company of the folks at Citadel Arts.

It’s marvellous what can be achieved by a community theatre company in a community space with a little ingenuity and a lot of hard work. For their eighth outing at the Leith Festival, Citadel Arts Group have pulled off another impressive double bill that celebrates Leith, gives a nod to local history, and sends a packed house home with a chuckle and a swell of local pride.

Dazzle takes its inspiration from one of Leith’s popular recent residents – Ciara Phillips’ stunning Dazzle Ship. As writer Alan Mountford explained to us, local woman Eva Mackenzie was one of the artists who worked on the original ships, which were designed to distract German U-boats during World War I. Citadel regular Andrea McKenzie takes on the role of Eva, a plummy North Berwicker, who likes to break the fourth wall for some local banter with her audience. Her pal Lizzie (Megan Fraser) is a rung or two down the social ladder, but the pair bond over art, adventure and love interests.

Meanwhile, Charles Donnelly and Gregor Davidson are kept busy switching between the different male parts, mainly men of the sea of various ranks. Donnelly’s a new face for Citadel, a very impressive addition to the team, whose experience shines. Expediency, however, means he plays a little younger than life, including as Eva’s prospective suitor, Norman Wilkinson. The play uses their relationship as its central thread, with the Dazzle project and the horrors of the war as the backdrop. Despite the tragedy of loss that war brings, it’s mainly light-hearted, daft in places (Davidson does a dappy, self-deprecating King George V) and sometimes takes a permissible short-cut (it’s difficult to believe the conversation convincing the navy to invest in the project passed quite so smoothly). There’s some nice sound and lighting effects, dazzle-related props and backdrop, and good use of the space, under the direction of Liz Hare. Not the hardest-hitting exploration of war you’ll ever see, but fun, informative and well-performed by a strong cast.

Jim Brown’s Whit Aboot The Wimmen?, directed by Mark Kydd, fast forwards a few decades to the 1960s. Mum (Laverne Edmonds), daughter Annie (Rachel Keiller) and grandad (Donnelly again) gather in a typical Leith parlour. Grandad’s a little overkeen on the booze, but it’s the women who face the biggest struggles – Mum frets over her neglectful husband and lost youth and opportunity, Annie her teddy boy boyfriend (Charlie West) who’s got an eye for the ladies. Luckily, Annie’s brassy friend Shona (Kirsty Punton) is on hand to keep them straight. It’s the call of the sea that keeps their men from treating them better. The whaling life takes them away to the Arctic, makes them distant, leads them into bad habits.

Like its predecessor, it’s chirpy and easy-to-watch with a distinctive local flavour. It’s more a snapshot of a family than a complete story arc. Little changes for the characters in the 45 minutes. All the same, there’s some funny lines, appealing characters and nice musical interludes.

Citadel continue to find interesting aspects of Leith life to explore and heartwarming evenings like this continue to do them, the Dockers’ Club and Leith Festival great credit. Long may it last.