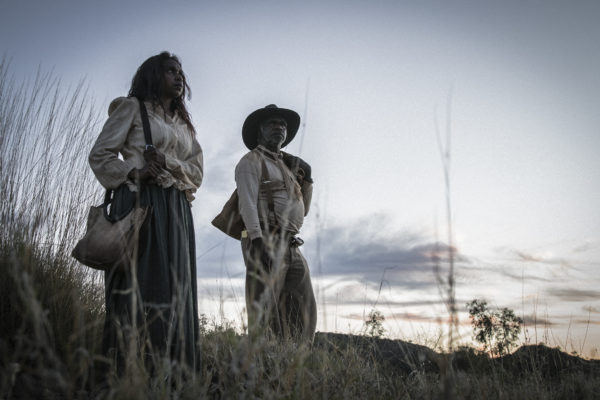 Nine years after his debut Samson and Delilah, Warwick Thornton returns with a harrowing and authentic Outback Western steeped in heat and violence, and based on a true story of all-too-familiar racism and injustice.

In the stark outback of the Northern Territory in 1929, Sam Kelly (Hamilton Morris) is a middle-aged Aboriginal farmer who works on the stead of kindly preacher Fred Smith (Sam Neill). Fred agrees to let Sam help brutal war veteran Harry March (Ewan Leslie) fix up his cattle yard. The relationship between Sam and Harry quickly sours irrevocably, culminating in Sam shooting Harry dead in self defence. Fully aware of how he’ll be perceived in the eyes of the law, he flees into the Outback with his wife Lizzie (Natassia Gorey-Furber), pursued by a makeshift posse led by Sergeant Fletcher (Bryan Brown).

Sweet Country may well be the most patient, unhurried film about a pursuit you could imagine. Thornton, who also acts as cinematographer, is fully aware of the extent to which the unforgiving beauty of the landscape is an asset. He favours long static takes of arid terrain shimmering in the heat, interspersed with close-ups of his characters and the lines this environment has riven into their skin. Scenes of dialogue are often overlaid with a seemingly out-of-context silent cutaway involving the character currently speaking. Whether these are past or future echoes is not immediately clear, but they are an incredibly artful and subtle way of establishing back story or fragments of character in a masterclass of show-don’t-tell writing.

Thornton would have been justified in making this film in a blaze of righteous fury, but he’s meticulous and fair in his character development. Every character is fleshed out with swift economy, but with understandable motivations. Even the repulsive March is afforded empathy as a man obviously traumatised by his wartime experiences; his mind curdled by bitterness and drink. Conversely, though a noble man, and the type of Christian that genuinely lives the teachings of Jesus, Fred’s encouragement that Sam and his family adopt his faith is still wrenching them from their own culture and spirituality. This is echoed in indigenous farmhand Archie’s words to a mixed race boy: “You’ve no lore, you have none of the stories of the Dreamtime”.

Falling somewhere between the searing, Biblically-tinged hell of John Hillcoat‘s The Proposition and the contemplative, atmospheric ‘slow western’ of Kelly Reichardt‘s Meek’s Cutoff, Sweet Country is a towering achievement of both controlled anger and the boundless grief for a lost culture. It doesn’t club you with a message, but lets you slowly broil in its visual intensity and its themes of the connection between people and their environment, and the ambiguity of justice. It is, sadly, very likely to slip past unnoticed by many viewers, but don’t be surprised to see Thornton’s film appear in a few best-of lists come the end of the year.