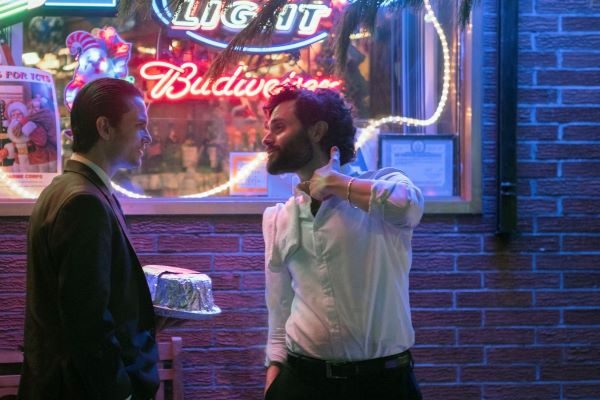 No amount of cameos from mafia-film royalty can distract from the bland taste and sloppy presentation.

Family is everything to the Mob. It’s the age-old rule of what not to touch – and precisely where to hurt someone the most. A gangster flick concealing an attempted family drama, director Jimmy Giannopoulo opens The Birthday Cake’s narrative ten years ago; fitting given the film’s decade-old aura.

A young Giovanni (Shiloh Fernandez), the nephew to the last remaining Mafia boss in Brooklyn, struggles to breathe in the family legacy. Soft, warm, yet determined to maintain the perception, Gio grapples with the recent loss of his father, taking solace with his cousin Leo (Emory Cohen), local preacher (Ewan McGregor) and crocked police office uncle Ricardo.

Gio’s father’s death is never unearthed, nor treated with the mystery one would dig for amidst the corruption of crime. It’s treated as a narrative device to push for empathy. The resulting journey of a young man falling victim to organised crime instead becomes a series of stereotypical vignettes as Gio traverses the Brooklyn streets carrying his mother’s cake, a gift for Uncle Angelo’s birthday. From a chance encounter with perhaps cinema’s most stereotypical crooked feds to the film’s saving scene with the comedic styles of a ganja-smoking Luiz Guzman as a love guru cab driver – The Birthday Cake’s individual scenes aren’t all feeble, but as a complete structure serve as a stop and start, plummeting any momentum or atmosphere.

When you hear the names Vincent Pastore, Paul Sorvino, William Fichtner and John Magaro, you’d be mistaken for making a snap judgement of The Birthday Cake’s calibre. But as much as this may sound like a gangster’s paradise, it couldn’t be more drab and lacklustre in execution. To squander such immeasurable talent for the sake of a few cameos in rushed sequences with zero development is more distracting than anything. And as expected, occasional performances are phoned in, playing stock characters they’ve been perfecting for decades. And when you’re finale dinner involves a Soprano, a Goodfella and a Prisoner – expectations are quite rightly stratospheric.

But there is an endeavour in moments, with a welcome return for Val Kilmer, who had stepped back somewhat from larger roles following his treatments for throat cancer. And though utilising a voice box to communicate, the dedication to a visual performance to convey emotional intent comes over without words. Though in the minority, the women throughout the film tend to have more understandable motivations and diverse emotions. Ashley Benson and Clara MacGregor are squandered as Mob girlfriends, but Lorraine Bracco, playing Gio’s mother, places herself as a crux of the story with the minimal screen time she has.

Layer upon layer of distracting faces emerges throughout, dressed in wash-out costume to blend them into the backdrops, each utilised without effort or purpose outside of their history or connotations with the drama. And it isn’t solely visually, the film’s score is jarring concerning the images on a screen. And while admirable to make efforts in changing the typical score for a gangster thriller, Giannopoulos’ composition cannot quite mesh with the film’s aesthetics or palette.

But then again, it’s rather difficult to source accompanying music given the cramped and stilted cinematography. Sean Price William’s framing of the film takes place between the streets of Brooklyn and lavish indoor Mafia spaces, blanketing colour and distorting many shots as the lighting at times wash out any detail within the shot. This approach leaves of the film bathed in bold colours with no purpose of impact.

There is nothing inherently offensive or violent, which is itself an issue for a gangster film, but despite such a rich roster of rogues, The Birthday Cake is nothing to celebrate. Bringing nothing different, serving up only meagre slices slathered in filler to disguise the blandness, no one should be more interested in the taxi driver with the munchies in a violent, serious mafia flick.

Available in cinemas and on-demand from Fri 16 Jul 2021