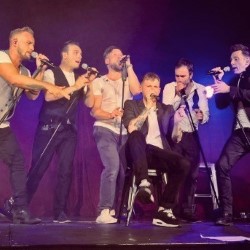 Going to watch The Magnets is like wearing a pair of moccasins – safe, comforting and very entertaining.

For any Glee or Pitch Perfect fans, the music’s been rewound a decade or two, with the a cappella quintet delving into a back catalogue of songs for a 1980s special. Stripping away the synthesizers, the group honour the sounds from this era with pure vocal harmonies, singing various mash-ups of favourite chart-hits, including a very polished one from Madness, which has the audience gyrating in their seats. There’s everything from Whitesnake, Backstreet Boys and Duran Duran to Spandau Ballet and Prince.

It’s a simple yet striking set, with the name of their band outlined in light bulbs at the back of the stage like a Hollywood sign. In front there are only five gold-coloured chairs and their mic stands, with nothing to detract from the remarkable a cappella being performed.

The choreography’s tight, harping back to the boy bands of the 80s, and there’s great camaraderie among the group. Their banter about films and TV from the era goes over the heads of some of the younger members of the audience, but they have their parents eating out of their hands.

These accomplished musicians certainly know how to work the room, imploring the audience to light up the torches on their mobiles and encouraging us to join in with choruses. It’s a lot of fun and goes to show that the songs from that decade still stand the test of time.

Human beatboxer John Pointer gives a hugely impressive solo rendition of the “Holy Trinity of Rhythm” – kick, snare, highhat – using just his voice and vocal muscles; Duncan Sandilands produces some gorgeous, deep bass sounds; cheeky Welshman Michael Conway, a Gary Barlow lookalike, has an amazing knack for hitting some glass-shatteringly high notes, along with Stevie Hutchinson, the other tenor of the group; while Callum McIntosh, their baritone, has an engaging presence and a voice that is like melting chocolate.

Hugely entertaining and highly polished, The Magnets might not quite have you dancing in the streets, but this family friendly show will most certainly have you up on your feet, dancing in the aisles and singing your heart out.