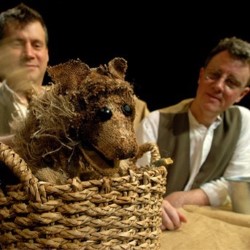 The Man Who Planted Trees

A tale as simple as the title suggests, The Man Who Planted Trees tells the story of Elzéard Bouffier, a humble French shepherd who coaxes forth an oasis of biodiversity from an inhospitable desert. Adapted from the novella by Jean Giono, Puppet State Theatre Company have brought back their firm Fringe favourite which uses puppetry, music, props and humour to bring to life this remarkable allegory.

Our narrator is none other than Jean himself, played with everyman relatability and easy charm by Richard Medrington. His stage partner, Rick Conte, is responsible for manning the lion’s share of the puppetwork and providing the voice for its most memorable character, Dog. The inclusion of the canine is a guileless trick to inject comedy and pathos into this most charming of tales, and it comes off superbly.

Conte must receive especial praise for his deft manipulation of all of the puppets, including subtle gestures which manage to imbue the characters with believable vitality. Meanwhile, Medrington’s affable manner and soothing brogue combine to effortlessly win over all in attendance, regardless of age group. It might be marketed as a show for youngsters, but there’s no doubting there’s enough to delight audience members both young and old.

The modest hessian set is paired up with pastoral music, scented breezes and gentle audience interaction to communicate an idyllic impression of rural 1920s France. Despite the fact that the play touches on sobering themes such as war, climate change, politics and the transience of life, it never gets bogged down in such issues and, on the few occasions it threatens to do so, is repeatedly rescued by the interjections of Dog.

The end result is a thought-provoking, touching piece of theatre which will leave audience members with a smile on their face and kindling in their heart. Who knows, it might even inspire the planting of a few mighty oaks, as well.