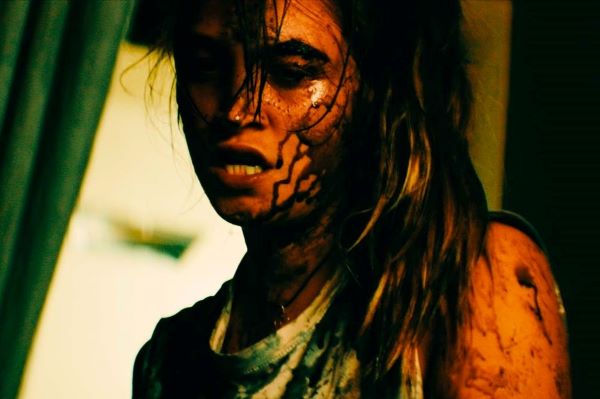 You can’t go wrong with a good B-movie creature feature. Some good creature design, some gooey, tactile practical effects, and a healthy injection of camp, and you’re on to a winner. It takes a while, therefore, to figure out where British writer/director Sam Walker goes wrong with this goofy, lo-fi, alien invasion flick. All the ingredients are there, and the film’s influences are fairly stellar, but the result is a lopsided mash-up that entertains in fits and starts, but leaves little lasting impression.

Three friends head for a hedonistic weekend in the Mojave desert at the holiday home of Heather (Sophie Vavasseur). As Heather and chums Diedre (Lucy Martin) and Charlotte (Chelsea Edge) relax, drink, and bicker during a meteor shower, something plunges from the sky and into the swimming pool. It turns out to be a weird, slimy and smelly little alien. Alpha-female Diedre wants it killed straight away and timid Heather panics that it’ll mess up her parents’ property. The more caring Charlotte, swayed by the creature’s cries, brings him into the house to recuperate. Then things get really strange.

The tone is set through the creature itself, and it’s both simple and very strange. Dan Martin‘s creation is something like a mewling, slimy, jelly bear cub. It’s grotesque, but oddly cute at the same time, which makes Charlotte’s maternal feelings toward it a little more understandable. It appears to be able to vary its weight and hypnotises its victims to strip and climb into a fleshy, psychedelic sex carpet for impregnation. It has the sexual mania aspect of Shivers and a whole lot of rubbery, wobbly flesh that owes a vast debt to Society. These are the moments in which The Seed really works, along with the anticipation afterwards, in which we wait for the inevitable horrible results to take effect on the dazed, strangely beatific victims.

But for a neat 90 minutes, there is too much lag. The central issue with The Seed is certainly in its pacing. For such a simple premise, it takes a long time for the creature’s nightmarish effect to get up to speed. All three leads perform ably, but their roles rarely rise above archetypal so the decision to build up their relationship does nothing more than reaffirm tensions between the women that are evident from the start. The old schoolfriends have stretched their relationship past elasticity, but this falls by the wayside once the alien’s hypnotic powers are revealed. Similarly, Walker makes much of Diedre and Heather’s status as social media influencers, suggesting some thematic flesh on the narrative bones. But again, this is quickly dropped, and seems to be device simply create an easy fissure between the perpetually online Diedre and Heather, and Charlotte who has no social media presence at all.

While there is evidence of both a satirical edge and a pure desire for flamboyant B-movie indulgence, Sam Walker never commits strongly enough to one or the other for it the film to succeed. There is an undoubted flare for striking and odd imagery, and it’s by no means an abject failure as a debut feature, but The Seed is too jumbled and oddly structured to really take root.

Available to stream on Shudder from Thu 10 Mar 2022