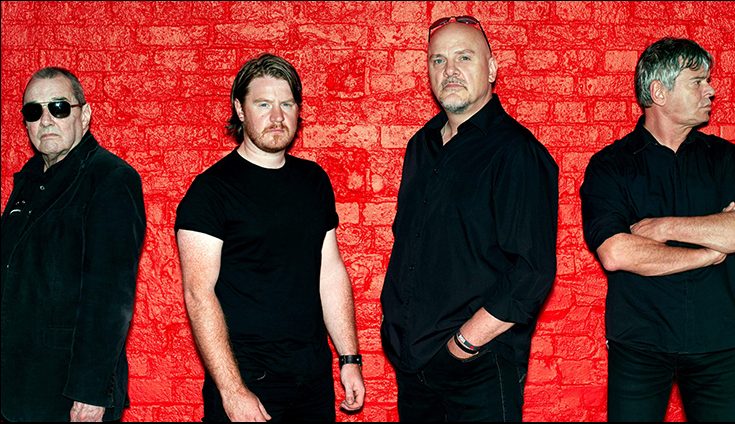 Dark lords of punk era show no signs of mellowing

To have seen The Stranglers in 1977 would have been quite something. But the 2017 version are no slouches, neither. No mellowing. No pussyfooting about. Just straight at it, like a tank through no man’s land.

Support act Ruts DC (aka The Ruts) set the tone in that regard. The trio are a right set of grafters, working up a rumble of dubby bass, crisp guitar and punchy drums. It’s tidier, and less snarly than back in the day, but no less convincing. They’re the openers from heaven as far as this gig is concerned. The crowd start mildly indifferent and end uproarious, pumped up by anthems like In A Rut and Babylon’s Burning. Even new song Music Must Destroy cuts muster. The reformed band’s own headline shows would be worth checking out.

Waltzinblack then signals the headliners onto the two tier stage. Drums and keys up back against the art deco cityscape backdrop, bass and guitar out front. The set glows orange and each takes to his corner.

Ill health has sadly taken Jet Black out of the game, but the noise they mesh together from the twin engines of JJ Burnel‘s bass and Dave Greenfield‘s keyboards is the same filthy swamp of rock. Baz Warne has been with the band since the turn of the century and he’s no idle stand-in for the long-departed Hugh Cornwell, his mastery of the back catalogue going right down to every sneer and growl, while Jim MacAulay has a big drumstool to fill, but he does so very well.

In a set packed with greatest hits, Peaches is the pick, its lascivious throb irrepressible. They swing it harder and tighter than on record, less slouchy. Forty years of touring, and it still sounds fresh as a daisy. Always The Sun stands out like a sore thumb stylistically, but sounds luscious and goes down a storm. The bum note, unfortunately, is Golden Brown. Burnel’s functional bassline is way too forward in the mix, dwarfing Greenfield’s iconic harpsichord riff. Beered up fans sway anyway, immune to the misfire.

Elsewhere, Greenfield’s swirling psychadelia gets plenty of action. It sets Walk On By on fire, as it always has. It leads us a merry dance on Down In The Sewer. It’d be a trump card in any band, but it fuses so perfectly with the rest of what the Stranglers have to offer, it would seem out of place anywhere else.

A couple of encores bring us Something Better Change and No More Heroes. The sight of bare-chested Burnel belting out Go Buddy Go confirms – you’re not gonna be dragging these old boys off the stage any time soon.