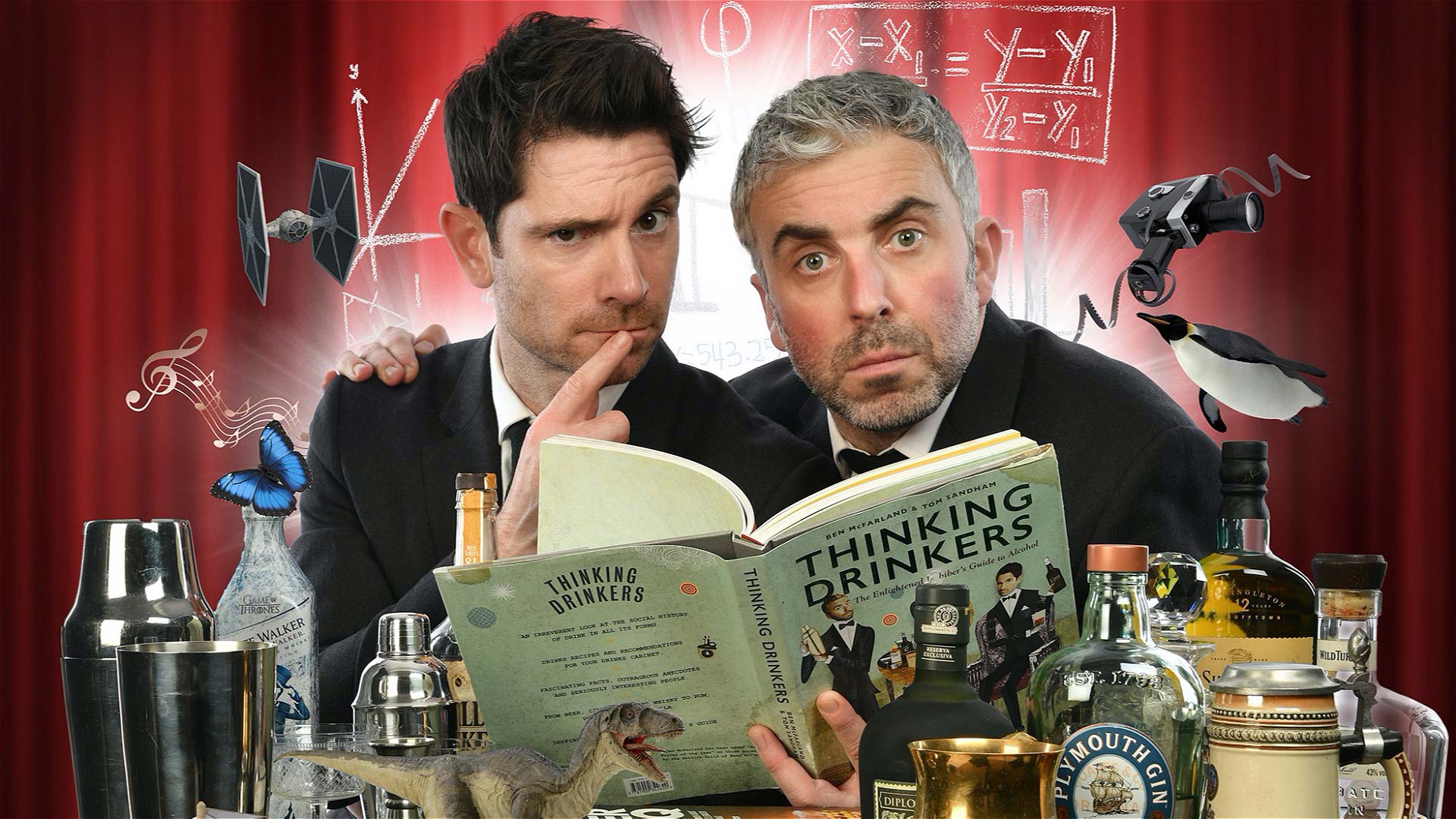 A hilarious hour of interactive imbibing

According to many of the big venues, bookings for shows are down so it’s a credit to the Thinking Drinkers aka Ben McFarland and Tom Sandham that they have an almost packed house on a Thursday night, in a lecture theatre venue.  But then again they have a winning formula and offer alcohol as part of the ticket price, with a little bit of knowledge and comedy thrown in for good measure. The crowds will come in their droves.

Two of the UK’s leading experts on drink, they know a thing or two about alcohol – Ben is triple-crowned ‘British Beer Writer of the Year’ and author of several award-winning books on beer, and Tom is an IWSC Spirits Communicator of the Year and Keeper of the Quaich, and former editor of leading cocktail magazine Class.

They lead us on a journey through five different drinks, including Krombacher Pils, Brockmans Gin, London Essence Tonic Water, Elijah Craig Bourbon, Diplomatico Reserva Sipping Rum, and finishing with Johnnie Walker Black Label, imparting their knowledge with fun and fervor and the odd costume changes, encouraging us to drink less but drink better.

This is a pub quiz but with a difference – no silly team names to choose and it’s every man/woman for himself with all the answers we need in the show, ‘if we just listen’. From a World Record Challenge to ‘word up’ to geography to music, each round tackles a different subject.

Some of their jokes may be clumsy but they work and there’s a method in their madness. They’re not embarrassed to strip down to basics, parading around the stage in nothing but flesh-coloured underpants to deliver another factoid, before yet another costume change, from Gorilla suits to stocking-clad Elizabethan men, to air hostesses on the Thinking Drinkers Airlines 6969.

These cheeky chappies deliver their lines with aplomb and even when the odd joke bombs, they still have the audience lapping up every word, eager to find the quiz answers and hopefully be in for a chance to win an un-named prize.

Their control of the noisy, boisterous crowd is admirable and is done with fun and jest, even to the politest of hecklers who, when challenged, answers, ‘excuse me, carry on!’ There’s no malice just good old-fashioned camaraderie like you’d find down your local.

The show finishes on a high with a music round so funny it has this reviewer choking on a drink as the Thinking Drinkers act out various film scores from Ghost (the pottery scene), Dirty Dancing (the lift scene), and Titanic (the ‘I’m flying’ pose).

A hilarious hour of interactive imbibing, this is one show you’ll definitely want to escape your armchairs and the heatwave for.