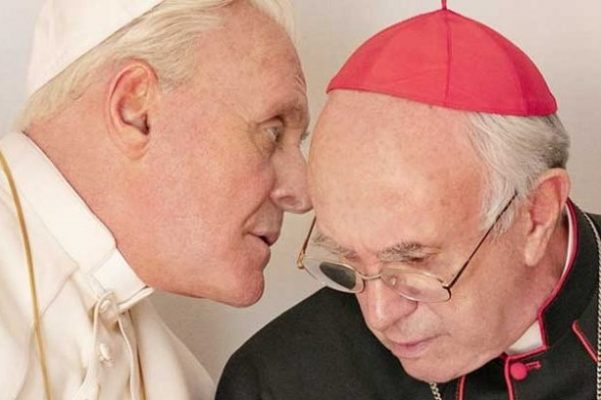 Another successful excavation of character from Anthony McCarten's biopic talents

With an audience of around 1.2 billion (give or take), Pope Francis, head of the Roman Catholic Church, arguably has the globe’s largest draw of worshippers, certainly exceeding actors, directors and writers. Some welcome his influence in an age where many criticise the Church over its inability to ordain women, its archaic views of sexuality and failures to tackle bureaucracy within. His predecessor, disagreeing virulently with Francis, may have just been the man to recognise this ability. Now if that isn’t a sound premise for one of the industry’s esteemed biopic writers, then we don’t know what is.

Delving into a subject many would resign to niche, Anthony McCarten’s The Two Popes squeezes each ounce of enthralling drama from one of organised religion’s most frustratingly difficult modern periods. With little surprise either, given McCarten’s previous work with award-winning biopics The Theory of Everything, Darkest Hour and Bohemian Rhapsody. An excavator of character, McCarten is an alchemist of biographies, homing in on aspects which are enticing for audiences, offering insight at the underbelly, though never to the off-putting degree. The same is true for the lives of Pope Benedict XVI and then-Cardinal Jorge Mario Bergoglio, who would later become Pope Francis following Benedict’s resignation.

Moving from the stage, it’s evident that McCarten’s screenplay still rings of its theatrical counterpart, particularly in the staging and framework of Anthony Hopkins’ conversations with Jonathan Pryce. Much of the film is centred on dialogue, discussing world issues and individual moralities. Naturally, Pryce is in his element, and it’s clear to see in his movements that Meirelles’ has put some form of staging into his direction. Visually, the film is superb, entirely cinematic in thought-process, Mark Tildesley’s design work gorgeously reflecting the hollow emptiness of the Vatican halls.

The two stars retain the English language, for the most part, dipping into Latin or German when appropriate, but the physical transformations are spot-on. Particularly Hopkins static, open-armed frame of an ailing leader, coming to terms with his redundancy in a fast-moving world. It stretches into the comedic elements, Hopkins’ Pope Benedict XVI, a man noted for his less empathetic approach, with a profoundly German wit ricochets well against Pryce’s more conventional pun making, the two naturally flowing from one to the other.

Reliant on Pryce and Hopkins, it’s no wonder The Two Popes is in safe hands. Profound character studies, blending histories, McCarten draws parallels with Bergoglio’s history with the atrocities surrounding Pope Benedict’s time as ‘Il Papa’. A scandal to shudder the church, the concealment of child abuse sharply turned the public eye towards the secrets of organised religion. Acknowledging Pope Benedict’s involvement in the cover-ups, this is not the focus of the narrative, but instead focusing on Bergoglio’s lesser-known past, and the ‘betrayal’ he feels to have committed in South America, which feels like a side-step from controversy.

Their flashbacks mark a tonal shift for the film, which for the most part has conducted a slower pace, reflective of the men it marks. The cardinal who once whistled ‘Dancing Queen’ in the Vatican bathrooms, who sought the piety of life, was of course, once a man. Juan Minujín’s performance offsets Pryce’s jolly, humble exterior for an aggressive, younger Priest who had a part to play in the ‘Dirty War’ of Argentina.

Concealing itself behind the visage of stuffiness, try not to judge The Two Popes on subject matter alone. For while it focuses on two men standing as the pinnacle or relics of religious spiritualism, the meat of the film centres on adversaries who find harmony within one another. A striking visual splendour, humour rippling itself in the vein of the script, Pryce and Hopkins carry McCarten’s delicately humane adaptation, with meticulous direction to present a true event. It encases a playful stretch of accounts of how these two men, a progressive moderate and a conservative leader, would find a common ground, and a love for tango dancing.