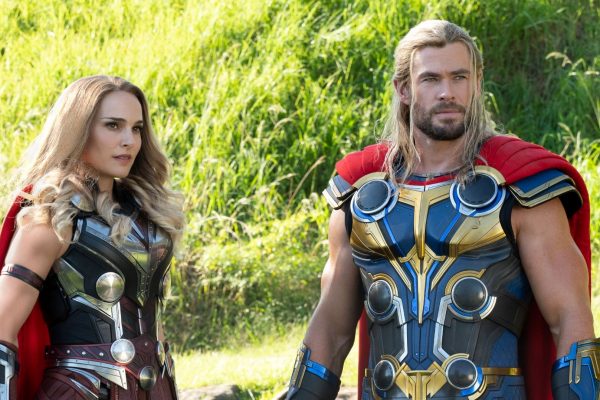 In a world of soulless remakes, dead-eyed sequels and pandering prequels, Thor: Love and Thunder is a welcome shock to the system. The latest offering from Marvel manages to toe the line between fantastical camp nonsense and genuine heartfelt emotion to deliver a thrilling and hilarious film.

Following on from the critically acclaimed and audience adored Thor: Ragnarok, Taika Watiti returns as director and proves he can more than handle the universe travelling, epic plot lines of superhero films. With a Guns N’ Roses heavy soundtrack, neon palette, and lashings of tongue in cheek humour he creates a visually stunning and witty film which is well paced and never feels like it overstays it’s welcome.

Chris Hemsworth is excellent as Thor, his comedic acting is pitch perfect and he gives real life and depth to the character, delivering not only jaunty quips, but a full-bodied performance that is constantly engaging and surprising. Thor: Love and Thunder sees Natalie Portman return as Dr Jane Foster and her character is not only given a lot more personality and time to develop than in the previous Thor films, but given the chance to be a powerful, complex superhero. She moves seamlessly from jokes to epic fight scenes and embodies the dual fragility and strength of Jane exquisitely.

The visuals are stunning, ranging from gilded palaces to neon space-scapes and an entire segment in black and white. The film feels cinematic and visually complex, with a sense of homage to ‘80s sci-fi, noir films and comic books, all carried out skilfully and thoughtfully with a real sense of love for what came before.

Christian Bale stars as the main villain, Gorr the God Butcher, armed with a necro-sword he is imposing and juxtaposes the camp drama of the heroes with his horrifying, black toothed appearance. Marvel villains often feel one-dimensional but Gorr is sympathetic, his plight quickly and effectively portrayed and his minion shadow creatures add another level to the excellent visuals, bringing Ray Harryhausen-esque titanic snakes and spiders. Bale brings his characteristic intensity and unhinged energy to the role but never veers into melodrama, remaining a frightening yet understandable villain.

With a host of hilarious cameos, including Russell Crowe and Melissa McCarthy, the film provides plenty of excitement for avid fans without alienating casual viewers. These moments add to the true sense of joy and excitement throughput all of the action which keeps the film truly vibrant and captivating throughout the entire runtime.

From butt jokes to screaming goats, Thor: Love and Thunder is a joyful and exciting film that is very easy to lose yourself in. With ridiculous visual gags, wonderfully bright and engaging characters, and a swiftly moving, easy to follow plot it is a fun and epic summer blockbuster and addition to the Marvel universe.