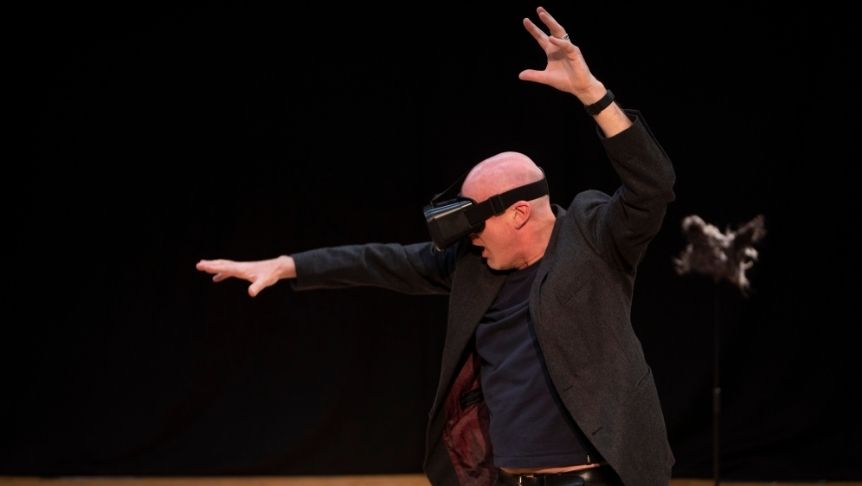 Truth's a Dog Must to Kennel

Stripped back in its presentation, this world premiere of Truth’s A Dog Must To Kennel takes place in a bare studio theatre, with lights full on, and nothing else but British experimental theatre maker, actor, writer, and director, Tim Crouch, in a 70-minute solo show. At some points, he’s wearing a virtual reality headset; at others, addressing the audience like a stand-up comedian. ‘The fool is me in this play – No jokes – just me.’ But there are jokes and at times, they have comedic value.

Crouch’s headset is a portal to the action taking place elsewhere, on the stage of a grander theatre, where patrons are classed by what they have paid for their seats. A production of Shakespeare’s King Lear is in progress. Crouch is quick to check on audience members who are coughing and to see if he is ok to proceed with the action. ‘We can take a moment, Joyce.’

Crouch says there is no need to have a knowledge of Shakespeare’s King Lear, a text most of us will have studied decades ago, to appreciate his work, but a more intimate understanding of the play would definitely bring more context to the scenario unfolding on his headset and the analogies that are being drawn. And those analogies – largely a commentary on the state of modern theatre – probably have more relevance to the theatre cognoscenti, of which there are many in the audience, and those familiar with Crouch’s other theatrical works, than to the casual festival-goer.

Forget VR, if you want the actual reality, you will have to see the show for yourself. It’s a challenging 70 minutes of theatre, pushing boundaries, but unless you share the theatre-maker’s desire to introspect about the industry, it is maybe too clever by half.