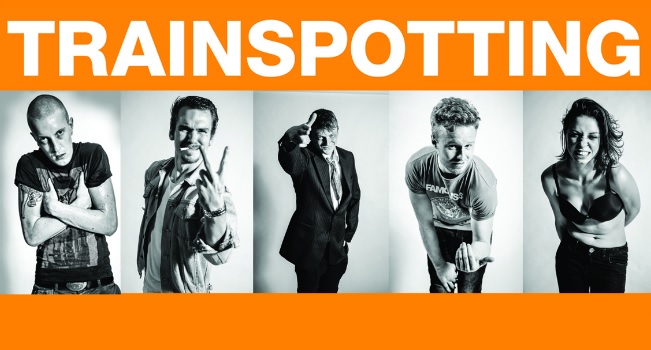 [Rating:5/5] Marvelously talented and perfectly cast. Being on skag is the only thing that could make this show better.

With more fluids being splashed than at Seaworld, Trainspotting lands at the Edinburgh Festival Fringe with a huge bang. The tone created by set, actors and lighting is stunning, all contributing to an amazing piece of gritty theatre that’s worth seeing again. The show starts before entering the venue with glow stick bracelets being allocated and hands stamped upon entering what appears to be a night club with the actors already raving, waving glow sticks and having a dance around the audience as they’re seated.

The show is pretty true to the book and includes everyone’s favourite scenes such the infamous bookie’s toilet. With an unusual set-up audience members sit on pallets, risers, the floor, anywhere they can perch scattered around the room as the actors perform around them, sometimes interacting. Audience interaction is funny, sometimes gross and cleverly executed by the actors involving everyone in the show. Props and set are completely believable creating the feeling of being in an underground rave in the middle of the night. Lighting is simple, but perfectly captures the mood and emotions of the actors. None of the actors stand out as being particularly great only because they’re all marvelously talented and perfectly cast.

A joint effort from Edinburgh’s In Your Face Theatre and London’s King’s Head Theatre both well regarded for bringing stand-out shows that you won’t see from anyone else with a performance that’s full on displaying frontal nudity, strong language, violence, sex, drug use and more strobe lights than a rave.  While Trainspotting is graphic and deals with tough social issues, they are addressed brilliantly provoking emotion and awe with the audience. Being on skag is the only thing that could make this show better.