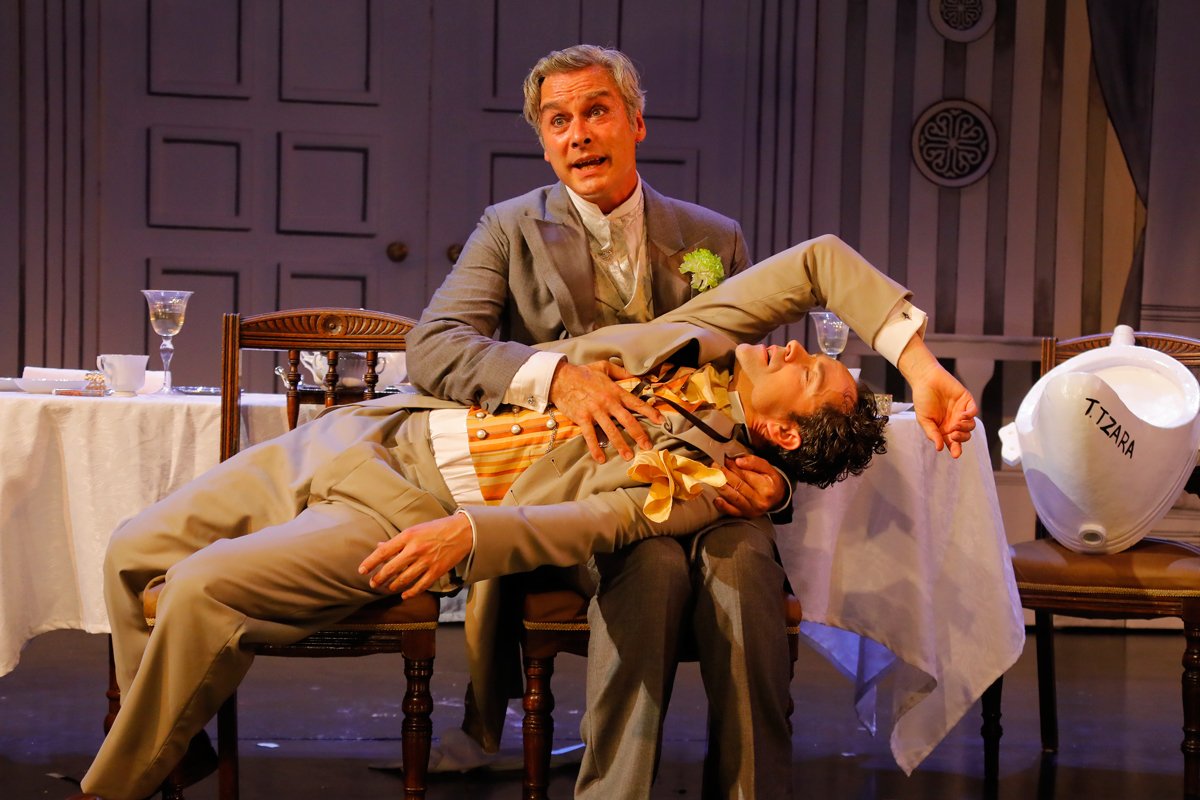 Travesties was born out of Tom Stoppard noting that in 1917, three of the 20th century’s most crucial revolutionaries – James Joyce, Dadaism founder Tristan Tzara, and Lenin – were all living in Zurich. This resulting work won the 1974 Tony for Best Play.

The plot centres on the figure of Henry Carr, an elderly man who reminisces, quite wrongly, while working at the British Consulate, that he was pivotal in the events of all three lives. Henry’s memories are seen through the prism (the original title of the piece) of Joyce writing Ulysses and both performing in Oscar Wilde’s The Importance of Being Earnest, over which a lawsuit is ensuing about the cost of trousers and tickets.

The audience are taken on a literary rollercoaster ride of head-spinning comedy, madcap musical turns and social commentary, involving deft footwork, swift changes and dialogue using various poetic and literary devices. The dialogue is delivered at a breakneck pace, requiring the audience to concentrate so as not to miss the next witty line. It’s a tour de force which the ensemble takes on with brio, directed by Richard Baron who seems to be able to bring the best performances out of his talented ensemble, putting his own take on this complicated play. The show also has a stunning set, designed by Adrian Rees, which transforms from library into a typical Swiss drawing room with trick cuckoo clocks, and dance staging by Chicago choreographer Chris Stuart-Wilson.

The central character of Henry Carr, played with skill and panache by Mark Elstob, hardly leaves the stage with an opening monologue which must be all of fifteen minutes, including a clever transformation trick along the way. Riveting stuff.

He is ably supported by Graham Mackay-Bruce as Tristan Tzara, his hilarious silent paper cutting in the library setting the scene for the absurd shenanigans to follow. Alex Scott-Fairley plays James Joyce as an Irish dance stepping intellectual, challenging Dadaism’s precepts: “What did you do in the war, dada?”

The pace of the piece slows down when it comes to the Russian Revolution and Lenin played by Alan Steele who presents a wonderful image when the library desk turns into his famous train journey.
Lucie-Mae Sumner playing Cecily shows again her performance and dance skills with a comic striptease. Her duet with Camrie Palmer playing Gwendolen is a delight, demonstrating their vocal talents and comic acting abilities. Supporting players Helen Logan as Nadya, speaking in Russian I presume, and Carl Patrick, playing Bennett the lackey with aplomb, complement this fast-paced and wacky production.

In the end, the performance by Mark Elstob takes centre stage in this strong ensemble production that delivers an evening of literary delight.