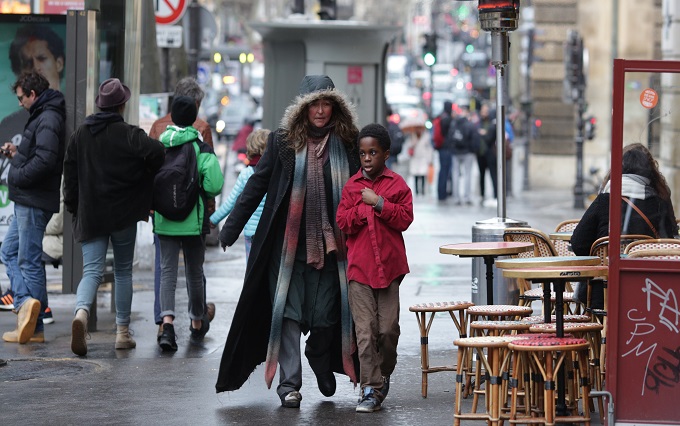 Under the Stars of Paris

Claus Drexel is a director who is unafraid to shine a light on the hidden aspects of French society, and the growing fracture between the rich and poor. With his feature length debut, Under the Stars of Paris, Drexel returns to the subject of homelessness that he first addressed in his 2013 documentary, On the Edge of the World. In doing so, he shines a light on the hidden underbelly of Paris to weave a story of friendship and strength between two very different, yet very similar, forms of outcast.

Christine (Catherine Frot) is homeless. Living beneath a bridge, she spends her days wandering the streets and waiting for her next meal from the food bank. One cold winter evening she finds Suli, an eight-year-old refugee from Burkina Faso who has lost his mother and is all alone. What unfolds is a heart-warming, albeit tragic, tale as the pair set out to try and find Suli’s mother.

As their journey takes them from the catacombs of Paris, to the bustling city streets, to isolated detention centres, and beyond, Drexel boldly conveys the realities that both these marginalised groups experience on a daily basis. The cold-hearted treatment of young Suli by French citizens due to his migrant status, the immediate suspicion cast upon Christine, and the way she is simply dismissed as a crazy old woman.

While Drexel doesn’t offer anything ground-breaking in the way he conveys his narrative, elements of his background filter through as shots of homeless villages and food banks are interspersed throughout the film. As such, it all feels very safe from a technical perspective.

Under the Stars of Paris is, however, greatly aided by the strength of its central star. Catherine Frot gives as strong a performance as one would expect from the ten-time César nominee. Her physicality perfectly captures the mannerisms and physical toll that living on the streets would have on an elderly woman. Likewise, her chemistry with young Mahamadou Yaffa as Suli is excellent. While there is limited dialogue between the pair due to the language barrier, just watching them walk along the street feels like a conversation in and of itself.

Ultimately, Under the Stars of Paris is a solid film from an experienced documentary maker that doesn’t overstay its welcome. Moreover, it draws attention to the struggles of marginalised groups within France well, but just lacks that necessary spark that would take it from being good to great, although Frot’s performance is a move in the right direction.

Screening as part of the French Film Festival UK 2020