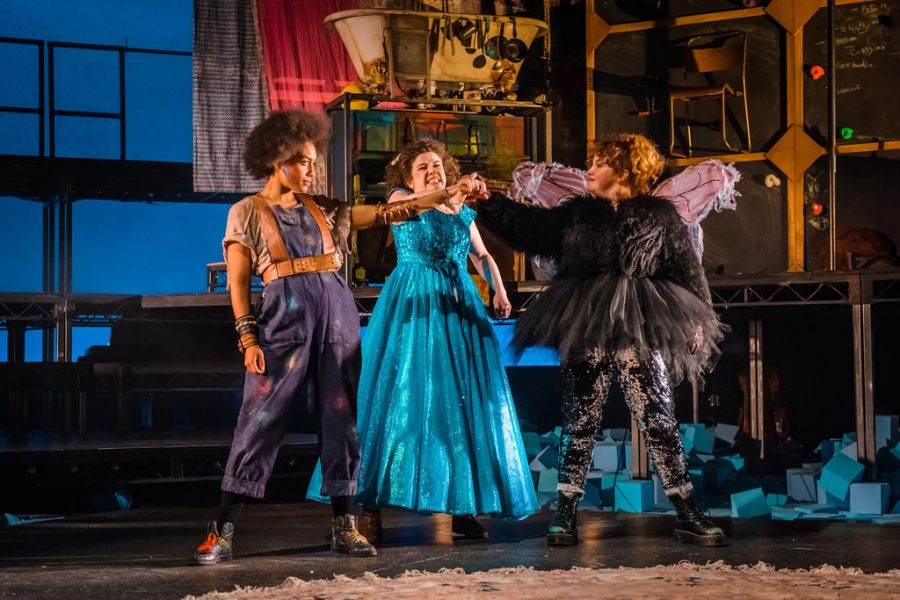 Hickson's adaptation of J.M. Barrie's classic tale is a glittering spectacle that is full of heart.

Ella Hickson‘s adaptation of the J.M Barrie classic, directed by Eleanor Rhode, is a clever and highly entertaining spin on the original. The well-loved, perennial features of the story – with which the audience will be undoubtedly familiar – remain, but are enriched by contemporary ideas and twists that lend the play nuance, heart and buckets of charm.

In Wendy and Peter Pan, it is Wendy (Isobel McArthur) who is the central protagonist, and rather than engaging in rivalry with the other female characters, Tink (Sally Reid) and Tiger Lily (Bonnie Baddoo), Wendy insists they team up in order to save Peter (Ziggy Heath) and the Lost Boys (Christine Gomes, Laurie Jamieson and Rhys Whomsley). Tink, rather than being a sort of mischievous, diminutive ingenue, is a rambunctious, loud-mouthed Scot, clad in glittery leggings and bovver boots. The Darling parents (Baddoo and Gyuri Sarossy) are more developed and interesting characters than in previous incarnations. Even Captain Hook, played as a cockney pseudo-punk by Sarossy and clad in a rather fetching red steampunk tailcoat, is somewhat more three-dimensional than usual, while still managing to channel an appropriate level of pantomime villain.

Hickson’s version does not shy away from the darker aspects of the story’s origins. J.M. Barrie’s work was inspired by the tragic death of the author’s older brother shortly before his 14th birthday, and the production explores the theme of grief by including another Darling sibling, Tom (Keiran Gallacher). Wendy’s trip to Never, Never Land comes to represent her struggle to process loss and feelings of self-blame. The theme is handled delicately and sensitively, meaning that the production is ultimately very touching and uplifting.

Despite the play’s more sombre central concerns, the production is a glittering spectacle, full of fun and humour. Max Johns‘ ostentatious set is visually stunning and cleverly constructed, while the flying effects are impressive and used to optimum effect. Certainly, the younger members of tonight’s audience are clearly captivated and thrilled throughout – in the second half, when some of the grown-ups are sensing the pace is slowing a little to accommodate some prolonged fight sequences that feel a little drawn-out, one youngster is so caught up in the action that they can’t help but join in by shouting out loudly in their best pirate voice.

Tasteful, witty and charming, Wendy and Peter Pan is a lively and polished production, sure to delight children and adults alike.