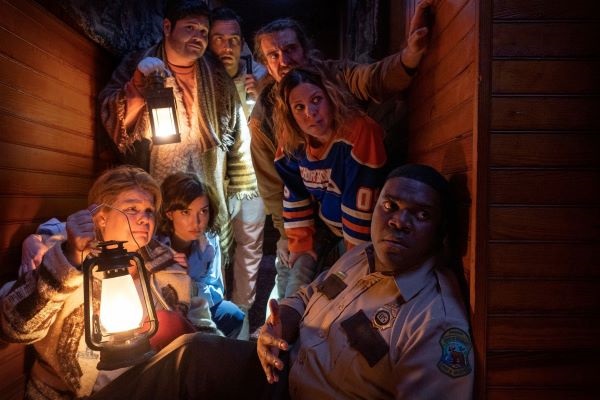 Comedy-horror whodunnit has familiar elements but is its own beast

Very few horror films open with a quote from Mr. Rogers, let alone utilise his name for a cheap but cheeky jump scare. This tongue-in-cheek prologue to Josh Ruben’s lycanthropic comedy mystery Werewolves Within clues us in to the tone of the film, as well as its thematic concerns. ‘Won’t you be my neighbour?’ was beloved Fred’s catchphrase. But even that most empathetic of men might have balked at what could be lurking next door.

Finn Wheeler (Sam Richardson), arrives in the snowy little town of Beaverfield to take up a new position as forest ranger. He wanders straight into an issue that is literally dividing the town. Sam Parker (Wayne Duvall), hopes to build a massive pipeline through the town. Those in favour of the proposal and those against run predictably parallel to the residents’ political leanings. Worse is to come when a blizzard knocks out the power, forcing all the residents into the lodge owned by Janine (Catherine Curtin). Not only this, the generators are sabotaged by something too ferocious to be human, but too smart to be animal. Long-standing tensions come to the fore when the townspeople decide there must be a werewolf among them.

Based on a video game, Werewolves Within neatly sidesteps all the issues commonly faced by such adaptations, by shredding all but the bare bones of the premise. It is, essentially, a detective story in a shaggy coat. One in which our outsider hero is as bumbling and clueless as our rich cast of suspects. Richardson is delightful as the pathologically polite and decent Finn, whose aversion to confrontation is not entirely useful for the difficult process of deduction. He’s matched by Milana Vayntrub – wisely evading the manic pixie dream girl vortex, as quirky, axe-throwing postal-worker Cecily, with whom Finn forms an immediate spark. A rich variety of comic actors like Harvey Guillén (What We Do in the Shadows), Michael Chernus (Orange Is the New Black), and Sarah Burns (Barry), play a heightened pack of eccentrics who are just as likely to be torn apart by their own grievances than by any werewolf. The characters are archetypes torn from recent US politics (Republicans seeing ‘Antifa’ round every corner, gun-toting rednecks, a liberal gay couple), but in the hands of gifted performers and sly scripting from Mishna Wolff, there is ample characterisation with which to engage.

Ruben’s direction impresses too, handling the action in a way that overwhelmingly leans towards the comedic, but which allows the occasional sudden gout of violence to feel that bit more shocking in context. It’s easy to see the touchstones of Shaun of the Dead (or even the small town ominousness of Hot Fuzz) and ensemble whodunnits like Clue and Knives Out in the film’s shifting DNA, but there is a distinctly unfashionable small town big heart here that eschews the archness of some of those references.

While influenced by the genre-straddling, fast-cutting ebullience of the films of Edgar Wright, the movie Werewolves Within most resembles is Jon Wright‘s Grabbers. Like that charming and rather overlooked ‘alien invasion warded off by monumental piss-up’ gem, Ruben’s film forces its cast of oddballs and misfits into a confined location, and also tempers its single-night urgency with a weirdly relaxed tone. Both have a nonchalant quality that arguably undercut any pretensions towards genuine horror and make the stakes feel slight, but which wring genuine joy and affection from threadbare tropes, and a slightly dorky, but adorable central couple.

Werewolves Within sets out primarily to entertain, rather than puzzle or horrify, and it certainly succeeds. Its consistent tone of affable humour keeps its central mystery from being really compelling or from really raising those horror hackles, but it’s very well made and hits a sweet spot of savvy pulp nectar that films like Tucker and Dale vs Evil and Ready Or Not reach, full of quotable lines, larger-than-life characters, and practically endless re-watch potential. As great a joy to watch as it clearly was to make.