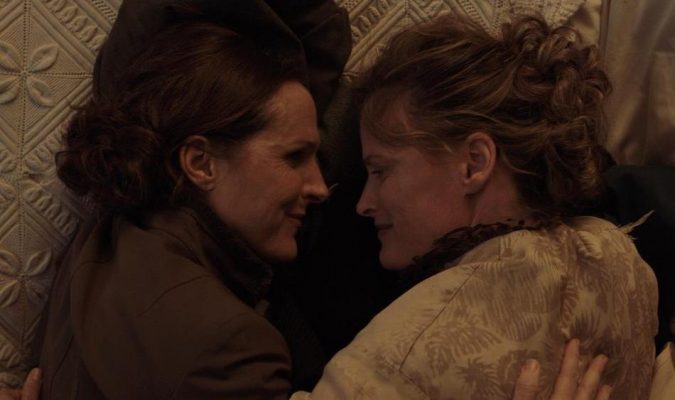 The titular character referred to in Wild Nights With Emily is American poet Emily Dickinson: highly regarded today yet relatively unknown during her lifetime. The common perception of Dickinson’s later life tends to be that of an antisocial hermit. What Wild Nights sets out to do is to rebuff this myth with a script based on hundreds of Dickinson’s correspondence letters and, surprisingly, conventions of the comedy genre.

The film is structured with a frame narrative, cleverly using the character of Mabel Loomis Todd — Dickinson’s first posthumous editor — as the lead into this quirky biopic. The poet is briefly conveyed as the recluse many have come to know her as, but this image is almost as quickly stripped away, with a passionate and daftly over-the-top kissing scene with sister-in-law and lover Susan Gilbert. Molly Shannon may seem an unusual choice to play the part but her strong comedic background serves her perfectly in this version of the Dickinson story. Her timing is spot on and her comebacks are punchy. Yet she also manages to bring pathos to the role and embodies a character quietly struggling to be accepted by society at large as well as her own family members.

There are less successful aspects of the film, though. Several members of the supporting cast don’t quite match Shannon’s comedic ease. At times their performances and delivery of lines are stiff and as a result, laughs aren’t always earned. There are issues with pace, too. Most of the scenes are oddly short, particularly in the first half of the film, and the flitting between various time frames feels hectic. It means the audience might find it difficult to fully settle into a narrative flow until at least the halfway point. It’s only at the build to the climax that there is a sense of surety and purpose. Lines of Dickinson’s poetry are recited beautifully by Shannon and a back and forth reading shared with a secondary character at the finale is stunning, providing one of the film’s most profound moments.

Aspects of Wild Nights feel unfinished, while others — such as Shannon’s understated performance — shine. However, it does achieve its purpose. Despite some uncertain acting and shaky structural points, the film redresses misconceptions around Dickinson and creates a new, hopefully more accurate, version of the gifted, misunderstood and misrepresented writer’s life.