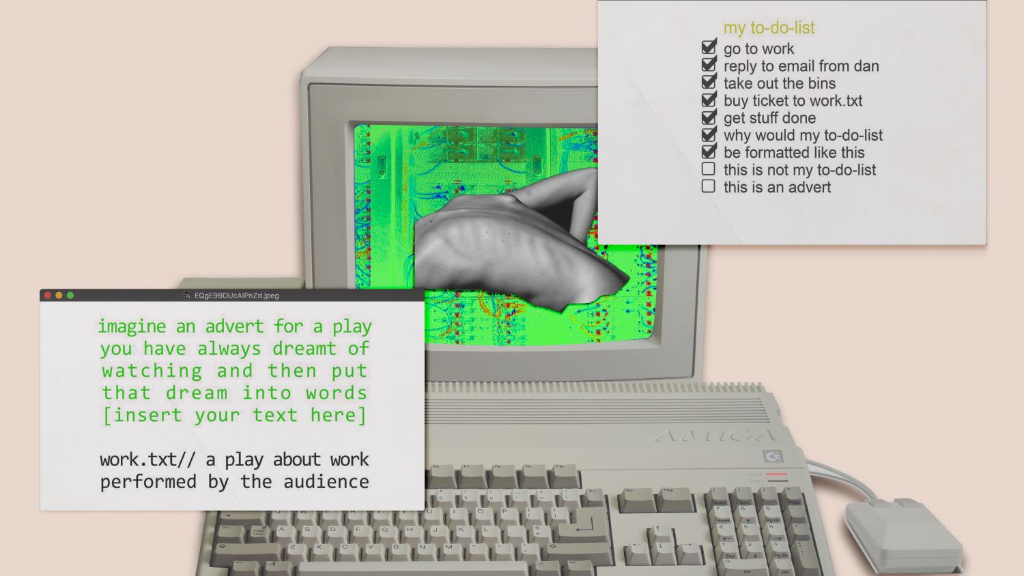 Inventive, endearing play that questions the future of work

Work.txt is a brilliant concept. It’s a play about work, to be found on Zoom. About working from home in lockdown, specifically. It happens live. And you, the audience, are the workers. So far, so disconcerting. But the reality is an exercise in such gently unobtrusive hand-holding that you’ll barely notice you’ve become the play at all.

We’re greeted with a countdown screen and some jaunty “hold” music. We’ll clock in to work in five, four, three minutes. The show starts – and we’re confronted with a Zoom room full of uneasy grins. The chat function fires into life and proceeds to issue a series of instructions to the workers. We work together to create a digital landscape for our story. Volunteers are requested. Sometimes to read a line or two. Sometimes to read a section of a script. And so the story unfolds.

Alex, one of our fellow callers, has stopped speaking in a Zoom meeting. He can’t be persuaded to interact. He sits in silence as hours and days go by. The instantaneous international reach of social media (plus hours of idle time) means his supposed silent protest finds its way online. He becomes an overnight silent celebrity. The unfolding storyline is brimming with wry quips about the weirdness of this working from home malarkey. And right on cue, an audience member’s dog climbs into his lap and stares, mournful greyhound eyes, into the camera.

You get the feeling that Brecht would approve of Nathan Ellis‘ script. The so-called wall between actors and audience lies around us in rubble. As someone who’s worked from home since last March, there’s something incredibly discombobulating (or incredibly meta) about being “in” a piece of theatre about working from home. But is this the future – an invisible workforce scattered like mushrooms, infrequently let out to see the light? And what will all of this work count for as the planet’s temperature rises and even the mushroom workers become obsolete? Artful sound design and Tom Foskett-Barnes‘ music brilliantly contributed to the sense that technology will outlive us all.

There’s plenty of food for thought here. But for someone who appreciates theatre that feels fundamentally “safe”, even if it’s pretending not to be – particularly where audience participation is involved – there were a few too many long pauses as we got used to the delivery of the instructions for this to be an entirely enjoyable experience. And for someone who’s now been sat at the kitchen table for eighteen months, some of the comedy based in and around working from home has worn a bit thin. That said, this is a funny, thoughtful script with moments of joy (collective karaoke) and as a window into what’s possible when you take theatre online, it’s definitely worth your work.