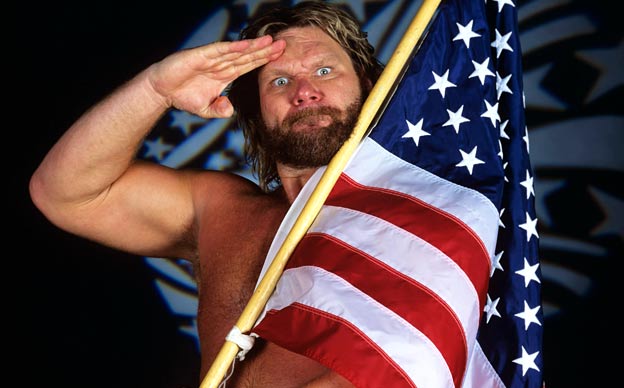 For anyone in love with the WWF in the 90s, it's a heartwarming trip down memory lane.

"An absolute treat for WWF fans"

This show is marketed as WWE Hall of Famer Hacksaw Jim Duggan’s 2×4 Tour One Man Comedy Show. Let’s be clear: those looking for the next curveball in cutting edge stand-up comedy should keep moving – there’s nothing to see here. For anyone who grew up idolising heroes such as Hulk Hogan, The Ultimate Warrior and of course, Hacksaw Jim Duggan , this hour is an absolute treat.

Duggan rumbles onto stage as a larger-than-life persona, predictably kicking off the gig with his trademark “Ho!”, which will be repeated with obvious relish throughout the show. For a 62-year-old who lived through the steroid-fuelled heyday of WWF sports entertainment, Duggan is in remarkable shape – especially when compared to some of his wrestling counterparts who, in his own wryly humorous words, have been dropping like flies of late.

His easy charm and instant likeability shine through from the moment he launches into the first anecdote about on-screen tag team partner and off-screen partner in crime, Jake the Snake Roberts, of which there will be many throughout the show. Before long, he has the diminutive crowd in stitches with his remarkably on-point impersonations of Macho Man Randy Savage (finger tics and all) and his yarns about Andre the Giant’s unique body aroma. It’s impossible not to like this man; though Duggan might not be at the forefront of stand-up, his material has more than enough belly laughs to delight an audience of diehard wrestling fans.

It’s not all slapstick and silliness, though. Duggan provides a unique insight into some of the darker and less well-publicised elements of the WWF, the WCW and the WWE. The proliferation of drugs (both performance-enhancing and recreational) in his generation, the untimely demise of many of his contemporaries and the cut-throat competiveness of the industry all provide food for thought – though all are given the winning Duggan treatment, which prevents the show from slipping into the regions of sentimentality or morbidity.

For those unfamiliar with wrestling and who have no nostalgic ties to the sport, this show would probably be a two-star affair, at best. But here, for the 20 or so lovers of Duggan’s 2×4, of Warrior’s facepaint and tassles, of Mr Perfect’s chewing gum, of Junkyard Dog’s chains, of spandex and short shorts, of steel chairs and ladder matches, of Royal Rumbles and Wrestlemanias, it’s a dream come true. He’s only playing for four nights – any WWF aficionado worth their salt owes it to themselves to see Duggan and hear his stories in this intimate setting.