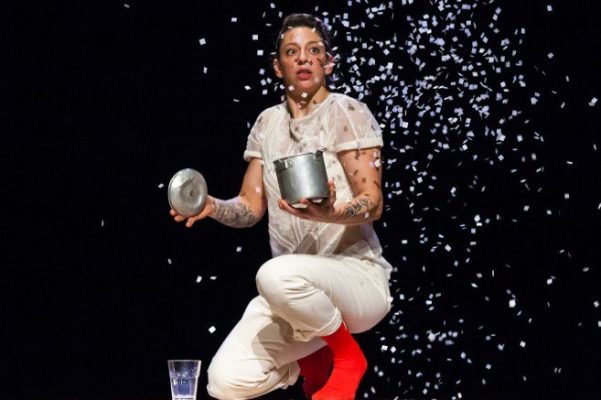 xoxo moongirl at Assembly Checkpoint is a stunning and explosive mixture of spoken-word and circus skills, physical theatre, illusion and magic. Set to a breathtakingly haunting musical score written and performed by the incredible Melanie Hsu – who aptly describes herself on her website as “a sonic painter of impossible worlds,” – this bold one-woman performance piece takes us on a journey through a highly personal memoir of domestic abuse, witnessed either in person or through locked doors or paper-thin partition walls.

Solo performer, Nicole “Cole” Burgio, evocatively shares her experiences of growing up with a semi-alcoholic mother and abusive obsessive-compulsive father, telling her tale in both words and mime; and flitting effortlessly from heart-wrenchingly tragic moments to darkly humorous interludes.  For example; while speaking to her mother on the telephone she hints at great news. “No, Mom, Cirque du Soleil didn’t call, it’s something else..,”  and effortlessly takes the story from words into aerial ballet and trapeze work and back again, her movements intricately choreographed to Hsu’s impeccable score.

At the risk of nit-picking, this reviewer would rather that Burgio had employed some other method of portraying subsidiary characters in her story other than picking random members of the audience and giving them lines on cards – this broke the cadence of the piece and left the performer vulnerable to the vagaries of a Fringe ensemble – but it is truly impossible to find much fault with such an otherwise immaculately crafted piece which proves without a shadow of a doubt that it is wholly possible to fuse strong and heart-felt narratives with highly physical circus skills and produce something so visually and emotionally satisfying that it defies description.

xoxo moongirl is Burgio and Hsu’s European debut but it is hoped that they will become regulars at the Fringe and this reviewer, for one, is anxiously awaiting their next collaboration.