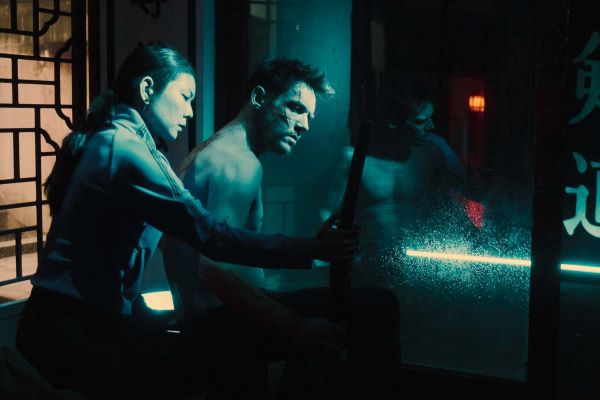 Brazil-based Yakuza epic never lives up to its enticing title

The Brazilian city of São Paulo is home to the largest diaspora of ethnic Japanese people outside of Japan itself. The Nikkei made the Liberdade district of the city their home from 1912 onwards. This melting pot background is the tasty setting for Vicente Amorim’s Yakuza Princess, in which a young woman learns she is the heir to a sprawling Yakuza crime syndicate. However, the culture clash specificity of this graphic novel adaptation (Danilo Bayruth‘s Samurai Shirô) is the most interesting thing about this baggy origin story. The rest is a grab bag of gangster cliches that pays homage to the classics of the genre, but never comes close to matching them.

Akemi (played by the capital-tastic musician MASUMI) is mourning the death of her grandfather in what she is told was an attempted robbery. When she meets a haunted, amnesiac westerner (Jonathan Rhys Meyers) who carries an ancient sword but has no idea why, she comes to realise that grandfather was in fact the head of a crime family based in Osaka. The foreigner believes his possession of the sword relates to Akemi’s family. So too do competing yakuza Kojiro (Eijiro Ozaki) and the world-weary Takeshi (Tsuyoshi Ihara), at least one of whom wants to sever Akemi from her birthright permanently.

All the ingredients are in place for a neo-noir feminist action spectacular: internecine gangster manoeuvring, an ancient weapon with a neat supernatural legend, a mysterious rōnin, neon-drenched city scape, a kickass female hero learning her destiny. It should be great, but practically every element is a misstep. Sadly, one of the most glaring is MASUMI herself. She certainly looks the part and looks fairly comfortable in her fight scenes, as far as one can tell given the hyperactive editing. But she doesn’t have the all-important charisma as an actress to engage as a lead. She is hamstrung further by some excruciating dialogue, long on pontification about honour and conflict, short on anything beyond cod wisdom and sub-Inigo Montoya threats. Rhys Meyers has cropped up in other unexpected places recently and been hugely impressive, but here a patchwork of scars for a face and penchant for full-frontal nudity can’t overcome the inherent blankness of his character. Like Akemi, his origins are a mystery that the viewer is in no rush to solve.

Some interesting mileage is gleaned from the corrupt sheen of São Paulo itself, a gaudy and dangerous melange to backdrop the rigidity and formality of a contemporary bushido code. Cinematographer Gustavo Hadba casts the first half in a haze of neon that would make Nicolas Winding Refn salivate, although there’s an artificial glossiness in the film itself that makes it all feel slightly like the early days of digital video around the turn of the millennium. It takes its time with its worldbuilding, but then forgets it all as it becomes a badly-edited clatter of swords and chatter of clichés, becoming correspondingly less interesting visually.

One of those unfortunate movies where an enticing title fails to translate into onscreen satisfaction, Yakuza Princess is just unspectacular in every department. You would be far better returning to the classics to which it constantly refers; Battles Without Honour and Humanity, Sonatine, Lady Snowblood, Female Prisoner #701: Scorpion, for example. All of these teem with what Yakuza Princess forgot to include; both engaging characters and a crucial sense of fun.