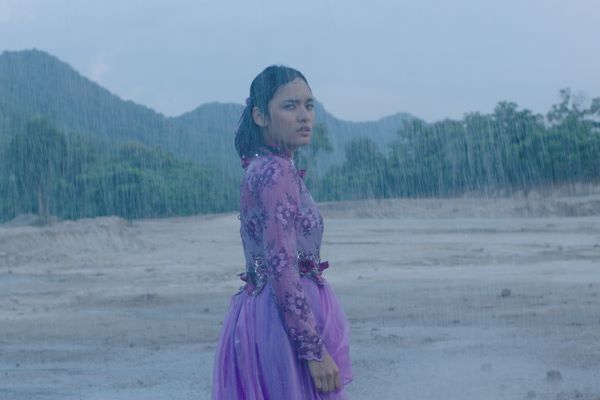 Sometimes when sitting down for a message-driven social drama, there’s a sense of steeling yourself, of snapping on some internal seatbelt. Quite often they’re films to be admired, not enjoyed. Who anticipated, for instance, a rollicking time with Sorry We Missed You or Just Mercy? Who made bookings for a repeat screening of Never, Rarely, Sometimes, Always or The Assistant? There is no lack of quality, but there’s no great desire for an immediate rewatch either. Kamila Andini’s Yuni, by contrast, manages to hit that sweet spot between social commentary and entertainment, a deft feat indeed. It’s not surprising that it’s been sweeping up awards at every festival it’s screened. There’s no finger-wagging and no hand-wringing, just an extremely engaging story, well told and exceptionally well acted. It just also happens to make some acute observations along the way.

Yuni (Arawinda Kirana) is a 16-year-old girl approaching the end of secondary school in Jenang, Indonesia. A curious, bright young woman, she wishes to continue on with education and certainly has the smarts for it. As with all girls her age however, she’s burdened with various constraints. Most immediately are the increasingly trenchant ‘Islamic club’ at her school, which is seeking to implement mandatory virginity tests for all girls, as well as banning all music classes as being incompatible with Islamic teachings. There is also the potential problem of an unwanted arranged marriage, something that has already befallen one of her friends. And there are already suitors knocking on the family door offering dowries.

The superb Kirana breathes full life into the titular role, filling out the simple but evocative writing of Andini and Prima Rusdi and creating a complex and thoroughly believable heroine. Yuni isn’t totally against the idea of marriage, given the right time and person. She’s certainly not against the idea of sex, sharing lustful texts with her friends regarding literature teacher Mr. Damar (Dimas Aditya). She’s also not above capriciously using the effect she has on the almost catatonically smitten younger student Yoga (Kevin Ardilova) to get him to do her Indonesian literature assignments for her. Every assignment counts towards the target to eventual scholarship. The entry requirements beside excellent grades? No married students.

There’s nothing in terms of story structure that will be unfamiliar, but few coming-of-age stories in recent memory are as charming, vibrant and well-written as Yuni. While asking serious questions about the educational system in Indonesia, and the instant pressures put on young girls to adopt the mantle of womanhood before they’ve even hung up their satchels (Andini takes great pains to show Yuni at times as a child; sulking, fighting, and possessed of a mild kleptomania for anything purple), this is background context. The film foregrounds its characters, not its message. And even minor characters are sketched with a sense of Dickensian detail. There’s Yuni’s friend Suci (Asmara Abigail), a happily divorced beautician, her loving but traditional grandmother (Nazla Thoyib), and the adorably smiley teacher Miss Lies (Marissa Anita, from the gonzo horror Impetigore) who fuels Yuni’s academic ambition. All are great additions to the story; one in which tradition, conformity, and societal pressures are the villains, rather than any nemesis.

But this is Kirana’s film, and she’s walked away with around six best actress gong at various festivals. She’s the life and soul of this vivid and candid story, which is bravely direct in its discussion of topics that the strict doctrines prevalent in Indonesia would seek to suppress. More than its heroine, the whole film is filled with a heady, rebellious spirit, and feels like a more adult and hedonistic spiritual twin to Haifaa al-Mansour‘s Wadjda. It’s sure to power its merry way further round the festival circuit, and don’t bet against a wide release. It’s issue-based filmmaking at its most entertaining and accessible.