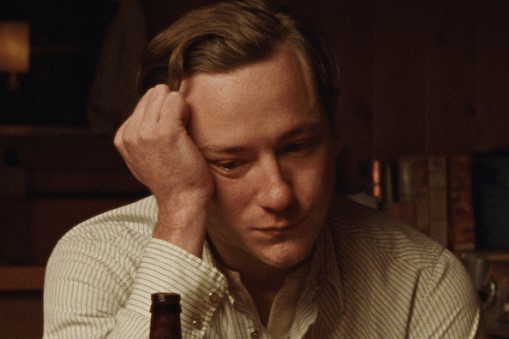 We chat to the writer and director of moving father/daughter short Lefty/Righty.

Writer/Director Max Walker-Silverman’s short film Lefty/Righty tells the healing story of a divorced rancher (Righty) in rural Colorado who makes one final visit to his ailing father alongside his estranged daughter (Lefty). The film has won the National Board of Review Student Award, the KODAK Vision Award, and the NYU Graduate Wasserman Directing Award. Lefty/Righty also screened at the Edinburgh International Film Festival on 27th June. We talked to Max about the making of the film and its unique Western setting.

I really enjoyed your film. It’s a look at a father-daughter relationship that comes across as more naturalistic than Hollywood equivalents that telegraph the characters emotions. How easy was it for you to get that feeling across in your script?

Well, I grew up in a place where for a variety of reasons – it’s inaccessible, it’s very high altitude – where few people have any extended family anywhere close and what happens is that people sort of create their families around them, they choose their families in a sense. I was interested in this film to kind of explore non-traditional family set-ups and show that whilst things can be imperfect, difficult and strained, people can kind of try the best they can to make it work.

There’s the impression when you see the characters in their environment that there’s obviously a variety of pressures, particularly unspoken economic and familial ones, weighing down on them. Was it important to you that that setting was central to the film?

Yeah, because there’s a sort of in-between-ness and a fragility to that part of the country, to that way of life. It’s a part of the world that is changing quickly, the experiences of the American West that the grandfather has will be very different to the experiences that the son will have that will be very different to those that his granddaughter will have. This makes them different to each other and that’s a challenge to their relationship on top of everything else.

But I guess in a way that there’s a sense of optimism to the ending, that these three generations will still be connected to and understand one another despite their differing life experiences. Did you intend for that optimism to come through?

Yeah, absolutely, I hope everything I do has optimism, because ultimately there’s affection, and one has to hope that that’s the most powerful thing of all, more powerful than change, divorce and death and whatnot.

I think that kind of affection between the characters of Lefty and Righty came across in the performances of the two lead actors. How did you go about finding them?

We started with Lewis Pullman, who’s a great actor based in Los Angeles and that was a connection that the producer Grant Hyun had, he could just so clearly inhabit the role, particularly because it’s a role with so little dialogue. You need someone whose face tells the story, as cliched as that is, someone who gets it in a non-verbal sense. The girl is played by a girl named Marty Grace Dennis, who is a local, we just found her through auditioning little kids, and the rare and unique thing that she had for a child was the ability to just be natural in front of the camera.

How long did you have with them to make sure that the actors gave these sort of performances? I‘m guessing that with a short film, the shooting schedule was quite limited.

Yeah, we shot for five or six days and weren’t able to have any rehearsal time unfortunately beforehand, because between Lewis being in action movies and Marty Grace being in First Grade, it was hard to find the time. However they were both just good and they seemed to understand the tone of the film; and in my limited experience, once an actor knows what movie they’re in, that’s sort of half the work done already.

Were there any difficulties in shooting on location in Colorado?

No, it’s always difficult but I was at NYU Graduate Film School and shooting in New York for a few years and in a strange way, shooting in the middle of nowhere is much easier. In New York, you have to deal with bringing in gear from LA and having to worry about parking permits and people coming in off the street. So when you’re shooting in rural Colorado, it’s nice to just be in an empty space and pull the equipment trucks off to the side of wherever you want. As a result, it ended up being a really smooth set and the credit for that also has to go to the crew, it was just a small crew.

Do you see your future films being shot in remote locations out West rather than the usual industry hubs of New York and LA as a result?

M: For the time being, yeah, I hope so. That’s really where my ideas are and its what I know and it’s what I care about. There’s a lot of stories left to be told in the American West. There’s such a defined narrative of the West particularly in regards to Hollywood and it’s incomplete and a lot of it is wrong. At the moment, I just see my small mission as being to do my part to correct and continue it.

Does your inspiration come more from your upbringing or your surroundings? With this film, how much of that was derived from people you had seen or known growing up in Colorado?

Yeah, a lot of it is based off stories I heard or things that I’d experienced. At the time, I was listening to a lot of John Prine and reading Anne Carson, these are the things that create a sort of mood, and once you have the mood, you find a couple of images and the script came out of that. I wish I had a more succinct answer for you [laughs].

No, that’s OK. I guess the story sort of slowly unfolded rather than just came straight out of your imagination fully formed.

Yeah, I mean it’s never fully formed, because even if you think it is, you get on set and it changes, and you get into the editing room and it changes again, and then you’ll be in front of an audience and it’ll somehow change again. I was pretty open to the unfolding of it.

How long did it take to write the script?

M: I tinkered with the idea for Lefty/Righty for about six months, but I actually wrote most of it over a short period and worked on it all the way up until shooting began.

Was the basic concept still there of the father-daughter relationship throughout the writing process or did that undergo any significant changes?

No, the basic concept was always there. The two images I first thought of was a bunch of bearded big dudes stuffed in a car and a cowboy with a young daughter.

These sort of amicable working conditions that you’ve mentioned earlier in our interview, that’s kind of rare in filmmaking in general, particularly now in this post-MeToo environment where we’re finding out that a lot of conditions that we thought were safe for actors and actresses really weren’t.  You seem to be somebody who just wants people to get along in a working situation, is that something that you really hope to achieve as a contrast to these revelations?

Very much so. One of the many horrible things that the MeToo movement kind of displayed is that maybe the whole hardcore Hollywood tough-guy routine was, like, evil, which just makes one reason out of many why you should just treat people all right and make sure they’re happy.

It’s funny about that sort of traditional tough-guy masculinity being toxic because, in a way, the film sort of subverts this with Righty. We first see him where he looks like your typical Western protagonist, the cowboy riding in on a horse, but his interactions with his daughter  and his ex-wife show an inner sensitivity. How much of that corresponds to your dislike of traditional macho attitudes?

All of it, I mean, masculinity is such a bizarre thing and looking at it through the prism of the American West, where it has such a defined quiet, stoic concept of masculinity that is seen as being very strong but is also extremely delicate and fragile. You can see that with those masculine assumptions, men have this fear of vulnerability that makes things so hard for themselves and for the people around them. I don’t know, I’ve not figured out Western masculinity at all, but I’m fascinated by it. It’s something that I want to keep working towards and writing about.

It definitely felt like that sentiment came across in Righty’s interactions with his father where not much was said. However, the conclusion implies that this kind of stoic masculinity can be used constructively to convey emotions, albeit in a restrained manner, that enables the renewal of the relationship between father and daughter.

Yeah, I mean that’s the idea, that through this guy’s softening, the daughter’s able to see that there’s a human being there. It’s hopeful and I’m hopeful about it.

Was the choice of the daughter also important in terms of deconstructing that traditional masculinity? A lot of Western stories about parent-child relationships tend to focus on fathers and sons.

Yes, it was very important. One of the things I was curious about was taking a sweet little girl and putting her in a room full of kind of shaggy dudes, what happens there? I think the answer ultimately is that they soften. I’ve known such hard men who just like turned into sugar by having a daughter or having a little girl around.

Yeah, I’ll be moving into features, but features can be done in that same style depending on their scope of course, there’s no reason why a feature can’t be done in a similar vain with a crew of like, five people and maybe one professional actor. I’m really drawn to working that way and see if it can be pulled off in a longer form.

Do you see the subject matter focusing on issues within the West and telling smaller personal stories or expanding into more larger-scale narratives?

Ultimately, yes, but for the time being, I’m gonna keep focusing on smaller character pieces cause I’m still learning, but yeah, one day, to do long, sprawling epic shit would be great.

Can you see yourself making an epic Western?

Maybe sort of like a modern-day equivalent, with a non-white cast.

Lefty/Righty screened as part of the Shorts:Constellations package at Edinburgh on Thu 27 Jun 2019.