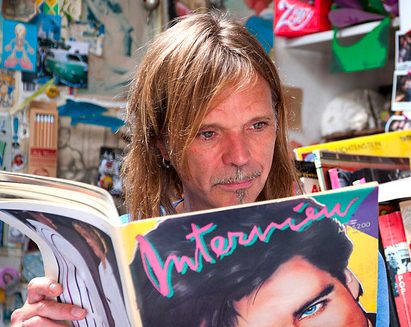 Earlier this year the Scottish National Gallery of Modern Art presented a key exhibition that brought together two legendary pop artists. The Andy Warhol and Eduardo Paolozzi exhibition I Want To Be A Machine is unfortunately over, however, gallery Deputy Director, Keith Hartley, is at the Edinburgh International Book Festival to discuss the published text which accompanied the exhibit. Hartley is sharing the stage with Dutch illustrator Typex, who has just released a new graphic biography on Warhol. The book is a massive 568 pages long  and took approximately five years to complete. To say it is a comprehensive volume is an understatement.

Hartley begins by giving a PowerPoint presentation on Warhol’s and Paolozzi’s work. Hartley gives a potted history of Warhol and pop art and explains how the artist changed the landscape of modern art: “Until Warhol abstract expression had a hold on modern art. It was how America took the focus of the art world away from Paris.” He also draws parallels between the collages of Paolozzi and the screen prints of Warhol.

Focus then turns to Typex and we learn within his biography the reader sees different cut-out and keep cards of the different people that have influenced Warhol’s story. These people include William De Kooning, Deborah Harry, Lou Reed, Bob Dylan, Edie Sedgwick and even Donald Trump. These characters all emphasise Warhol’s infatuation with celebrity and give his biography a touch of glamour and intrigue. Within the book Typex uses different illustrator styles and techniques to tell Warhol’s story. The author calls the work “a factual fairy-tale” as he took liberties with some of the historical events that he is presenting.

The conclusion of the event, chaired by art critic at The Herald, Jan Patience, presents the idea that the current culture of social media and individuals becoming stars through curating their own lifestyle is a world in which Warhol would have thrived in. Despite not being around to enjoy social media, Andy Warhol’s influence on popular culture is obvious and he still remains a fascination today.