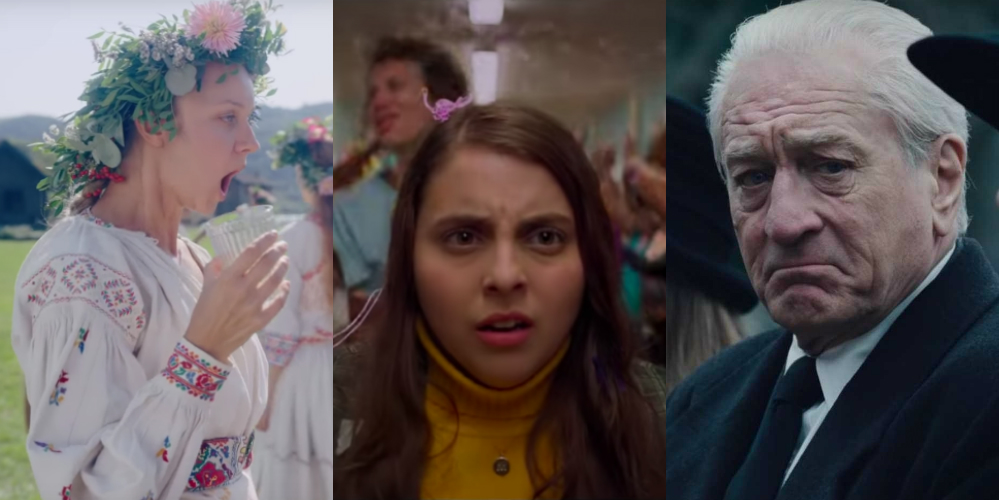 It’s been another busy year for our film team. Across new releases, Blu-rays and film festivals, we’ve done nearly 400 film reviews in 2019. Plenty of options from which to pick our best new films of 2019.

All Wee Review writers were invited to submit lists of their favourite UK releases of 2019 and had the option to spread their votes thinly between multiple films or concentrate them on a few special ones. Altogether, 46 separate films were selected (including Downton Abbey – no critical snobbery here!), but near the top there was quite a consensus as to which the best ones were. Here’s the Top Ten:

“It’s a powerful literary combination, and the script by Chang-dong and Oh Jung-mi, wears it proudly on its sleeve. Namedropping not only Faulkner, but also The Great Gatsby, from which it draws a clear parallel, it touches on the schisms between Korea’s classes, the rural farming folk and the wealthy elites. The relationship between Ben, Hae-mi and Jong-su is particularly clear in trying to evoke a hint of Fitzgerald‘s novel. Yet it’s only a single facet of this multi-layered and deeply engaging story, winding a complex psychological journey through the events that baffle and fascinate in equal measure.”

“‘Based on an actual lie,’ are the first words to appear on screen… It will almost definitely be more truthful than any Hollywood film that opens with ‘inspired by a true story’…

The Farewell provides a complete culture shock between the East and the West, while also posing morally complex questions… [Lulu] Wang [proves] herself as one of the best filmmakers in the world today.”

“Writer/director Jordan Peele made an explosive debut, Get Out, which grabbed the attention of the critics and audiences with its layered, taught thrills and biting social commentary… Along came the trailer of Us, and it looked like Peele was at it again this time with an even more horror-based concoction.

Peele is a very accomplished filmmaker and he produces some terrifying imagery and sequences. He uses music to unnerving effect and the cast are equally game… It’s accomplished horror movie-making and somewhat makes you wish for a simpler film once the explanations start to arrive.”

“With his recent Silence, and now with The Irishman, Scorsese is at his most contemplative: in Silence, the contemplation focused on the potential absence of God; in The Irishman, it’s the question of what to do with the time afforded you, before it expires.

De Niro hasn’t been better in years… Pesci as Bufalino is a different beast to his antic, mercurial bad boys in Goodfellas and Casino… but the star of the show, and the source of The Irishman’s greatest pleasures, is Al Pacino. It’s a ripping performance which embeds him centrally into the texture and rhythm of the film; his rants provide the joyous paroxysms of Pacino ham acting at its most unencumbered, while his quiet moments of deliberation attain an affecting distinction.”

“The former punk rock star of Spanish cinema [Almodóvar] isn’t going out with a whimper. His latest is a quietly passionate and satisfying work with a possibly career-defining performance from Antonio Banderas…

40 years into his career this is a film that feels like a summation of what has gone before. It’s the filmmaker not just reassessing his own legacy, but acting as the curator of his legend. There are some longueurs that wallow in autobiographical indulgence, but for the most part, this is top-level Almodóvar.”

5. Once Upon A Time In Hollywood

“Once Upon a Time… in Hollywood is so much more than your average Tarantino picture. In fact, it is probably the least Tarantino movie he has ever made. Less violence, more comedy, and a much slower pace than usual (though it still flies by). Tarantino has created, by far, one of his most complex features to date. Mixed with his outstanding rewriting of history, Once Upon a Time is up there with Tarantino’s best.”

“A female buddy film in the guise of a high-school partying movie, Booksmart is endlessly funny and outrageous, yet always grounded by its realistic central relationship,” is how the BBC described Olivia Wilde’s directorial debut. Although we didn’t review it ourselves, our writers scored it as high as everyone else seemed to.

“The sketchy historical accuracy of the film feels gloriously and hilariously irrelevant, as the film is far from being a conventional period piece. Rather, director Yorgos Lanthimos showcases his signature surrealist comedy shtick… but this time imbued with acerbic caricature-rendering worthy of William Makepeace Thackeray and the obvious, easy pleasure that comes from applying contemporary humour and irreverent, modern dialogue to historical settings.

Olivia Colman is predictably outstanding in her portrayal of Queen Anne… [Emma] Stone holds her own, too, switching with ease between the sweet, apparent guilelessness that wins the Queen’s affection and determined resolve as she concocts plots to further her position and influence at court.

The Favourite is a decidedly enjoyable romp and further evidence of Lanthimos’ status as a formidable and ingenious auteur in the world of comedy.”

Another one we didn’t get chance to review ourselves. Still, enough of our writers loved Ari Aster’s folk horror to place it second on our yearly list. It was what Empire magazine called “a ride that any lover of cinema should take.”

“Joker proves to be a great maturing for Todd Phillips, who had previously been known for low-brow comedy films, and features a once-in-a-lifetime performance from Joaquin Phoenix that will no doubt go down in infamy. It’s a groundbreaking comic book movie that should change comic book movies for years to come.”