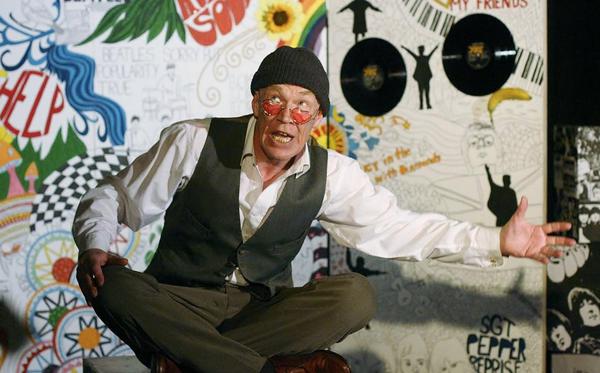 A Life With The Beatles

[Rating:4/5] An enjoyable look at the Beatles' career through the eyes of road manager, Neil Aspinall.

Over forty years after their demise, interesting ways to tell the Beatles’ story are getting thin on the ground. At the point when a professional Beatles historian can produce a 960-page biography of the era before they were famous, what really is left to say? Still, Italian writer Davide Verazzani has found a fruitful and underexplored angle to the tale, and produced a charming little play.

A Life With The Beatles is the band’s familiar progression told from the perspective of road manager Neil Aspinall, one of many dubbed the “Fifth Beatle”. It’s Aspinall’s story, but Ian Sexon doesn’t so much play Aspinall – the language is too florid for that – as narrate the tale through his eyes, leaping into character as John, Paul, George, Ringo, Brian Epstein, or most brilliantly, George Martin, as the tale requires. He’s good, energetic, passionate, although occasionally plays to a bigger room than the one we’re in.

Excellent creative use is made of the Beatles music. It’s used for mood setting, emotional jolts, even lyrical gags (an ill-timed juke box choice as some bad news has been broken), all the time emphasising their ingenuity and stunningly quick development as a band. Sexon niftily works with it, timing his storytelling with finesse.

The centrepiece is a wonderful exposition of the making of A Day In The Life, using a jigsaw of the Sgt. Pepper album cover as a metaphor for its progress. Sexon talks us through its orchestral climax with passion, poetry and instinct.

With reasonable justification, Pepper has been picked as the band’s creative and the play’s emotional peak; this is fair. But the comedown is skipped through unsatisfyingly. We spend so long with Pepper that we’re rushed through the Beatles latter years. The White Album, Abbey Road and Let It Be are merged together, when they could be picked apart for evidence of the disintegration which Aspinall, now in later life and missing those highs, is wistfully contemplating.

Nevertheless, this is a loving and colourful production, which despite the well-worn subject matter never feels tired. An enjoyable hour, and not just for Beatlemaniacs.