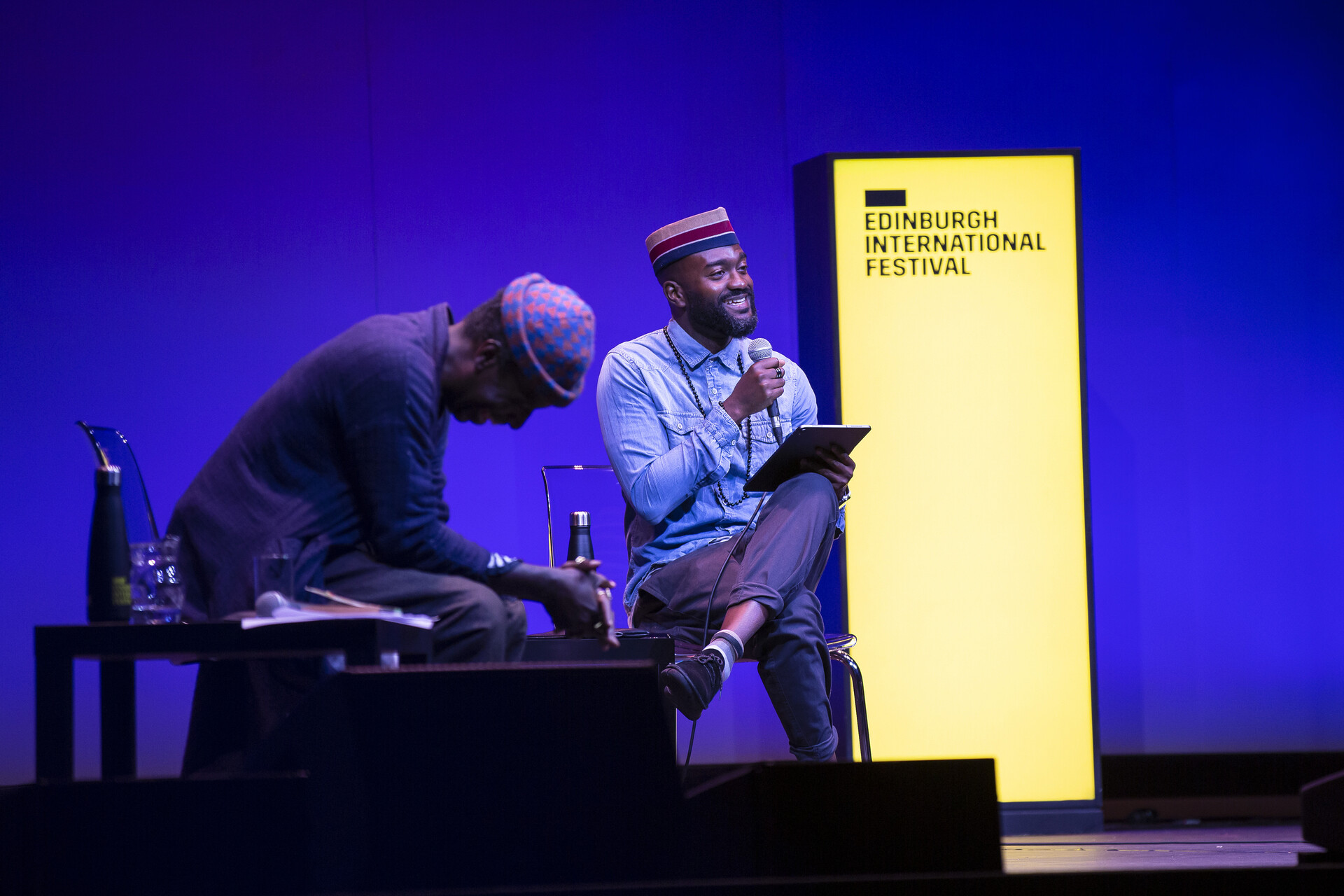 A Toast to the People: Inua Ellams & Saul Williams

An exceptional evening of poetry from two powerhouses

On the second evening of the A Toast to the People series, the Edinburgh International Festival and Edinburgh International Book Festival treat their audience to two poetry powerhouses. Though distinct in their approach and delivery of their sets, Inua Ellams and Saul Williams share a magnetic presence onstage, resulting in an exceptional evening of poetry and discussion that covers a plethora of subjects.

First up is Ellams, a London-based Nigerian poet who has also found success as a playwright and performer. Smiling ear-to-ear as he takes off his facemask, his energy resonates off the stage. Not only is he excited to be performing tonight, he also appears to be in awe of fellow performer Williams; Ellams shares that before every performance, he prays using words taken from one of Williams’ works. With an iPad in hand, Ellams reveals that he hasn’t planned what he will read tonight (other than his ‘Toast’, though he almost forgets about that one). Instead, with every poem he has ever written at his disposal, he picks poems featuring words suggested by the audience.

Though unrehearsed, Ellams seamlessly falls into the rhythm of the poems recited. Each one has a story, and by coincidence, many of them revolve around his home of South London. In ‘Lovers, liars, conjurers and thieves: an ode to South London’, Ellam brings London’s streets to life. Another recalls the aftermath of the London riots, and the palpable sense of desperation and helplessness felt as you walked through the burnt-out high street.

Ellams’ relaxed approach almost gets the better of him as he nearly forgets to perform his commissioned Toast. Inspired by Scotland’s history of slavery, ‘Stormborn’ is a toast to the suffering endured and lives lost. Naturally, the subject matter ends Ellams’ set on a sombre note, yet the beautifully written piece is a touching tribute.

The atmosphere after Ellams’ charming performance is relaxed – one not prepared for what Williams has in store. As the internationally renowned writer and musician comes onstage, he barely glances at the audience. Without even a hello, Williams dives straight into his untitled Toast. The poem’s opening and Williams’ delivery resemble a presidential address. His commanding, formidable stage presence and work has everyone on the edge of their seats, waiting for a reprieve. His Toast is a relentless piece of work that seems to encapsulate every personal, social, political, and worldly issue. Perfectly embodying the series’ theme of ‘emergence’, it’s accentuated by the pace and tempo that changes throughout. Williams is a gifted orator and to see him perform live is a marvel to behold.

Once his Toast is out of the way, Williams begins to relax. The incessant screeching of seagulls above us causes him to lose his composure and smile; in that moment, it feels as though we all finally can breathe. Though his rhetoric is still intimidating, Williams is an exceptional performer and will have you wanting to hear and read more of his work after the night is over.

The evening ends with a discussion between Ellams, Williams, and returning host Nadine Aisha Jassat. What starts as reflections on the themes of truth and lies in their work leads to a heartfelt and thought-provoking conversation about loss, memory, and hopes for the future. Choosing to the end the show as it began, both poets agree to perform one final piece. Dedicating the piece to Ellams, Williams closes the evening by reciting a section of Untimely Meditations from memory, including Ellams’ aforementioned prayer “God grant me wings. I’m too fly not to fly.” It’s a special ending to a spectacular evening.