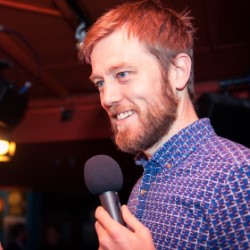 A leisurely hour with the unfussy Yorkshire comedian.

We’ve already labelled one person a zen comedian this Fringe. To open this show, Alun Cochrane self-identifies as one, before embarking on this leisurely, genial hour that doesn’t get too carried away with anything.

Yorkshireman Cochrane can take a very simple topic and keep finding an angle on it. Sneezing might be one line for a normal comic, but Cochrane keep gently teasing out the jokes. He’s got stuff on different types of sneezes, the mechanics of sneezes, an encounter with a sneezer. Greetings, likewise. He takes the simplicities of ways to say hello and the complications of saying goodbye and keeps squeezing funny bits out for our enjoyment.

He does dip a toe in deeper waters. There’s Brexit stuff – there has to be – but he’s middle of the road politically, and just wants to avoid an argument. On religion too, he’s lackadaisical. He ponders the benefits of joining and pitfalls of leaving the world religions, but you’ll need to look elsewhere for strong conclusions. Everything’s approached for its pros and its cons by a man who seems largely content with things. There’s a lot of the -ish in Alunish Cochranish.

His best stuff is when creating hypothetical situations for himself. He thinks up increasingly uncommon crimes for an imagined new prisoner, and wonders how they might go down with the jail’s top dog. Will there be a little “gift” left in the canteen dinner or a spot of violence? And there’s a good section where he supposes what the rise of the robots would do for the masses of non-boffins amongst us. It’s not looking positive.

Alun Cochrane is the kind of mid-career comedian it’s always a pleasure to see at the Stand. Good room, evening slot, experienced performer, guaranteed good time. Always with a cheeky half-smile on his face, he’s at the entertainment, rather than the esoteric end of the Fringe. There’s a slight sense that we could all just gather here outside Fringe time when there’s less distracting things on; this doesn’t need a Fringe to find its audience. All the same, it’s a shame to hear he won’t be back for the next few years. His children are at an age when he wants to spend time with them over summer, and no-one begrudges this very likeable comic that.