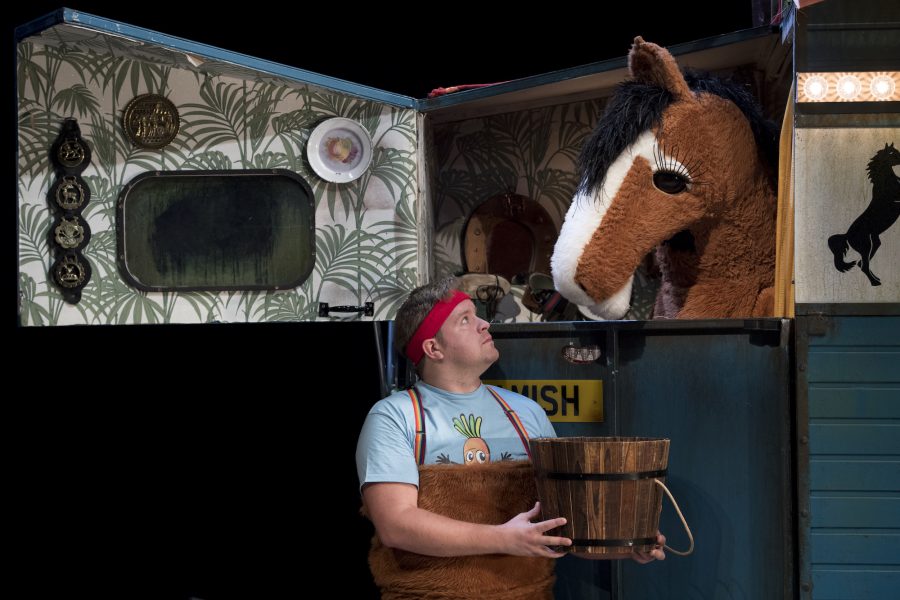 Enchanting children's theatre that will win over adults too.

The McCuddy Brothers are also known as the Famous Equestrian Illusionists. Except even the King’s Theatre don’t want Equestrian Illusionists these days. They haven’t worked for a year and need to figure out a plan, fast. In the meantime, they retell their mother’s favourite story, Black Beauty – the tale of a black horse with a white star on his forehead.

For adults who grew up with Anna Sewell’s classic novel, Black Beauty, this is a nostalgic treat. Remember Ginger who had a nasty inclination to nip? And stoical little Merrylegs? That said, at a guess the story was brand new to the vast majority of this young audience who sat enraptured throughout the show.

This is a perfectly crafted show that has been touring to enthusiastic audiences since its creation in 2016. There’s enough movement, energy and excitement to keep the youngest kids riveted for the 80-minute duration. The script distils the book in child-friendly form, making relatively light work of the more harrowing aspects (the fire in the stables, routine cruelty and neglect). At the same time, it gives a satisfyingly adult depth to the depiction of the camaraderie and co-dependence between the two brothers.

Shona Reppe‘s staging is wonderfully inventive. Most of the action takes place in and around the necessary accessory for any equine illusionist: the horsebox. Yet an array of ramps, shutters, curtains and peepholes transport us around the country. Even the most humdrum objects are given new equine life as characters in the tale, though Hamish the horse is the unquestionable star.

Actors Paul Curley and John Currivan give every impression of having a ball; their energy is infectious. Currivan is every little inch the big brother, bossing his brother around and coercing him into sharing Black Beauty’s story. Curley perfectly evokes the knife edge of a child’s emotions, veering from grief to outrage to hilarity in moments. They’re a fabulous, physically talented, whip-quick funny team.

After a couple of days at the Traverse in Edinburgh, the team are heading to Manchester and then you have a precious ten shows in Glasgow. Tickets for these are selling fast. A story of a horse or a story that restores your faith in persistence, hope and humanity. Whichever version you take home with you, you’ll leave enchanted. And maybe humming Champion The Wonderhorse. Class.