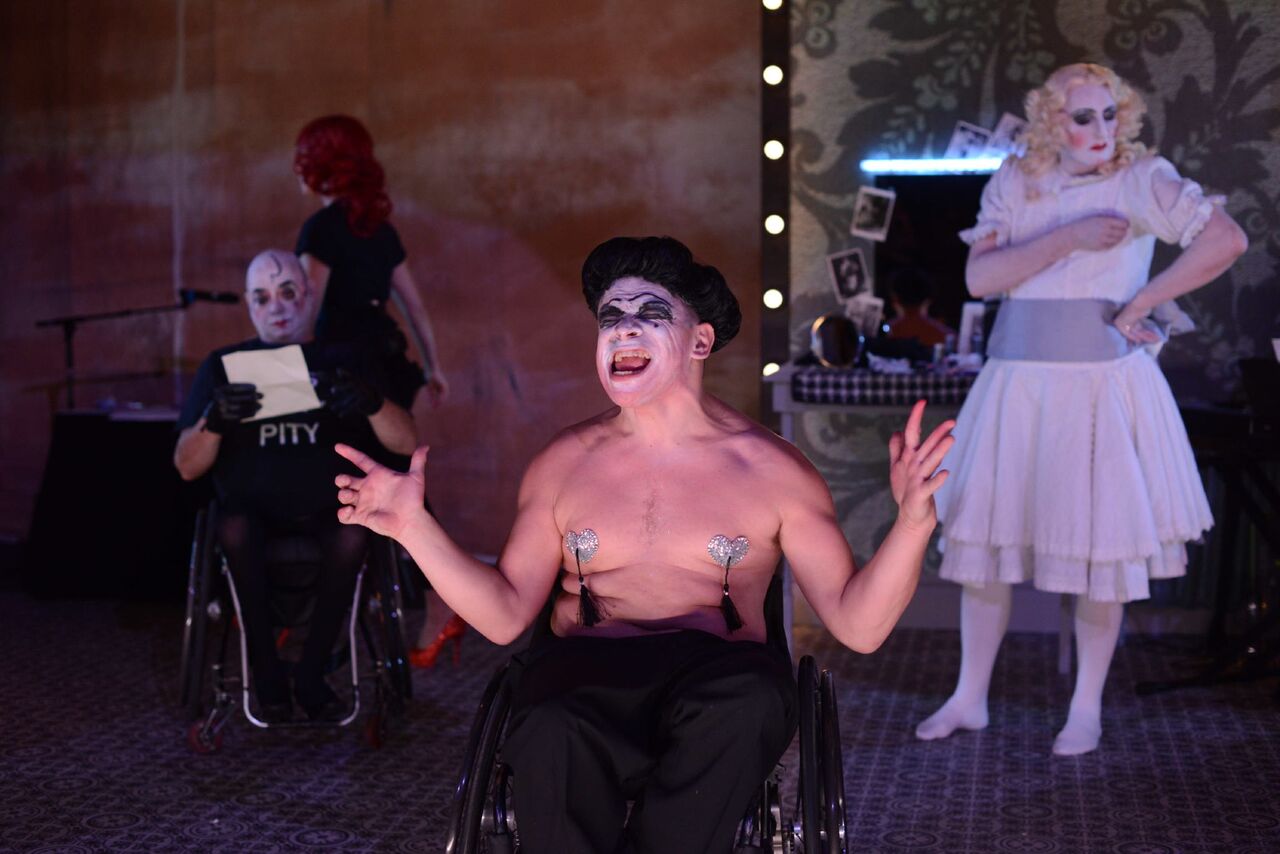 Biting drag comedy that shines a discoball on disability in theatre.

Blanche and Butch is a play about a play based on a film… backstage. But what sounds like an incredibly niche premise successfully reels us in with remarkable ease as the curtain literally lifts on the opening drag queen performance to reveal the performers’ dressing room and all of the gossip, drama and heartbreak within.

The three central characters are actors, re-enacting the classic Whatever Happened to Baby Jane?. However, a key difference is that the performers (unlike Bette Davis and Joan Crawford) are actually disabled. And it’s a drag act. Knowledge of the cult camp film isn’t necessary, though, as the play focuses tightly on the characters and their own lives, rather than relying on references to the move or in-jokes for laughs.

The bitingly honest atmosphere is quickly established with a cracking and coarse entrance from Kinny Gardner’s Bette and the un-PC dialogue takes flight from there onwards. However, it is never written in for shock value alone. The characters have experienced such rich, challenging and colourful lives that there is no point in speaking euphemistically or with winks and nudges. They know who they are and so do the audience. Butch and Bette are jaded performers who claim to be pioneers and rebels whilst not always being honest about their motivations. And Blanche is the protégé, denied the limelight because of his disability and relegated to a supporting part in the “play” by his supposed mentors.

It is through this manipulative relationship that actor and writer Robert Softley Gale cleverly explores one of the show’s central concerns: prejudice amongst those who experience prejudice. Butch and Bette’s words, although funny, begin to reveal their own bigotry towards others who are “more” disabled than they, and highlight an issue shared amongst many minority groups – the LGBT community for one, which the show also touches on. Ultimately, Blanche is given her moment in the spotlight, but in a direct and sincere address to the audience forces us to consider whether or not we take her seriously or can ever really appreciate her experience as a disabled actor.

As well as these weighty topics, the show also entertains us through edgy one-liners, gothic-garish costumes (recognisable from the film they are paying homage to) and catchy music – some original, some disco classics. However, the songs do occasionally interject at odd moments and threaten to ruin the flow of the narrative.

Blanche and Butch is a twisted mix of camp, drama, comedy and music that is both glamorous and sharp. However, it offers far more than a superficial drag act, delving into important subjects and opening a window into disability and discrimination in the acting world and beyond.