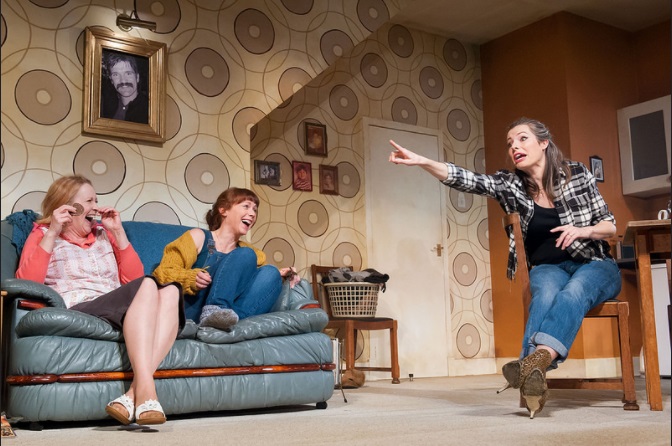 Opening with a helicopter searchlight roaming the audience, Bold Girls, directed by Richard Baron, takes us back to early 1990s Belfast, complete with road blockades, burning buses, and British soldiers trampling through your flowerbeds. A retro-looking kitchen/living room set soon advances slowly across the stage, creating a similar effect to a cinematic zoom, narrowing the focus to the domestic arena. The Troubles take a background role, as the drama centres on the daily lives of three women – Marie (Lucianne McEvoy), Cassie (Scarlett Mack), and Nora (Deirdre Davis) – and the arrival of the mysterious teenager Deirdre (Sinéad Sharkey), who comes wielding a knife like “a wee bit of hard truth” and shatters the illusions and self-delusions they use to cope.

Bold Girls, by Rona Munro, was first produced by 7:84 in 1991. While many of the issues faced by the women in the play, like domestic abuse and cheating husbands, are still around, the expectation that only men take an active role in politics while their wives stay home and clean the floors is now a little dated. In light of that, the unrealistic dreams and self-deception the characters use to cope with their political powerlessness does not resonate as women’s experience today – though the urge to escape in face of feelings of powerlessness will still be familiar to many, albeit for reasons of poverty or geography more than gender.

The stage design helps reinforce Deirdre’s assertion that “the whole town’s a prison”, with its enormous, prison-like, grey brick wall, visible around the edges of the cheerful domesticity of Marie’s house, and dominating the stage during the club scenes. Between the wall, the helicopter searchlight, and the raid on the club, the image of a police state comes to mind, which is mirrored in Cassie’s complaints about the behaviour of girls being policed (by mothers, not the state) far more than that of their brothers’.

Despite the omnipresent signs of violence lurking in the background, it never feels like a gloomy play about war. There are many comedic moments to be found, from the black humour in Nora’s anecdote about standing up to the police to Cassie’s drunken dance solo at the club, and they are played effectively by the capable cast. Between the humour and the brightly coloured set and costumes, it is strangely easy to believe that Bold Girls is a cheery and upbeat play, though this is as much a delusion as anything its characters believe.