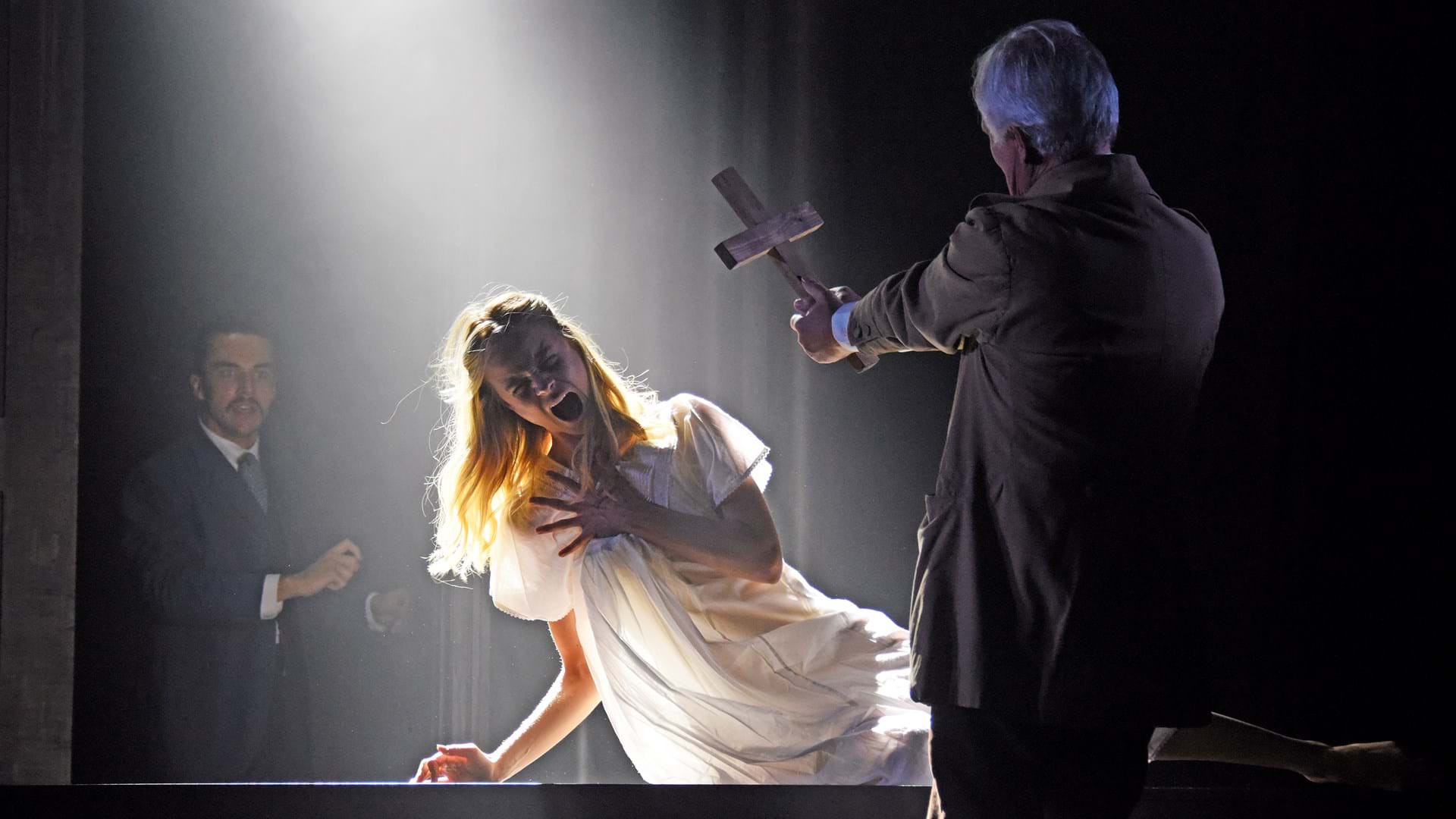 Bram Stoker’s Dracula, brought to the stage in a new adaptation by the Touring Consortium Theatre Company, is visually delectable but fails to truly seduce the audience.

Opening with a screeching, shuddering noise and pulsing strobes, the theatre is plunged immediately into chaos; bodies writhe on the stage, contorted, before disappearing in a flash. An overwhelming feeling of danger and intrigue is created. This sensory overload is made possible by impeccable lighting and staging, with a set mainly formed of large black columns which are moved to create cells, train stations and castles – metaphorically and physically keeping the characters apart or caging them in an ingenious way. Similarly, the lighting and music are endlessly entertaining and terrifying, with the strobe in particular offering a unique and memorable theatrical experience.

The issue, however, is that this immediate intensity and innovation fades to traditional acting and a very familiar storyline. The ambition and originality of the staging is never met by the plot and action.

The cast offer strong performances, playing their roles well, with Olivia Swann as Mina and Jessica Webber as Lucy offering an endearing look at female friendship. Also notable are Evan Milton as Doctor Seward – who blends humour, grief and desire perfectly – and Philip Bretherton as Professor Van Helsing, who is enigmatic and hilarious in turns. However, there is no true exploration or deeper look at the characters; they are seen only through brief, fleeting interactions, leaving a sense of superficiality, with the characterisation seeming rushed at points.

The presence of a female Renfield (played here by Cheryl Campbell) is an interesting move but fails to truly retell or adapt the story in a meaningful way. The character is well-acted but the mania and madness are understated; they come across more as quirks in her character, resulting often in humour instead of tension or fear.

Scenes shift quickly between settings in  Lucy’s home in Whitby, Transylvania and the Asylum. They are timed and executed skilfully, but the back-and-forth storytelling means no real tension is built between characters and the plot. The frequent use of flashbacks is jarring and becomes a little tedious.

There are moments of true wonder but these moments are brief and the illusions seem underused. The moments of physical theatre with Dracula’s brides are stunning, with the performers using their bodies to portray hunger and sexual anguish. However, once again these are too brief, with the majority of the show focusing on uninspired dialogue.

Bram Stoker’s Dracula is a case of two modes of storytelling clashing: on one hand there is the desire to tell Dracula’s story in a traditional format, while on the other hand exciting the audience with intense and strange staging. The lack of cohesion between the two means the show is not as effective as it should be considering the huge talent on stage. So, while this retelling of Dracula offers slick, sensual and frightening visuals, it lacks true originality or memorability.