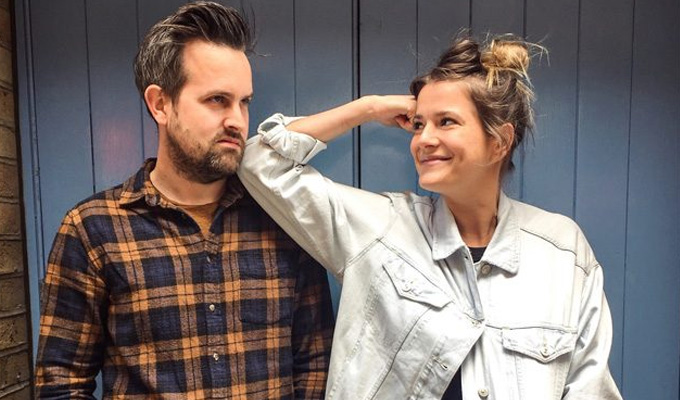 For their debut Fringe hour, the “world’s first comedy trio with only two members”, Bread and Geller have created something rather excellent.  Prime Time is a blistering flurry of skits and scenes that are not only of a consistently high quality but nicely showcase the talents of the two performers.

They duo of Ellie Ross and Andrew Boomer kick off with one of their longer sketches, in which Ross’ stand-in negotiator tries to talk Boomer’s potential suicide down from a ledge.  The kicker is that all the fully trained units are out dealing with other, more urgent jumpers to the outrage of Boomer.  The scene plays out nicely, with a devilish sense of humour, but then unexpectedly and audaciously ends on a point of grammar.  It’s an eye-catching beginning, and Prime Time rarely disappoints from there.

Many scenes rattle by in the blink of an eye, and not all stick in the memory, but the duo seem to have a good understanding of when a sketch has run its course, with very few overstaying their welcome.  The speed with which they batter through these brief vignettes is dizzying so if one falls a little flat, there’s another along in a second that may be more to your taste.

Some of the strongest scenes however are the ones given the time to breathe.  They’re also often the ones where the lure of an easy laugh is resisted in favour of a taste of darker territory, or even poignancy and heartbreak.  The former is exemplified by a vigorous parody of ‘Tale as Old As Time’ from Beauty and the Beast, which strips away Disney’s sanitised take on the original fairy tale to get to the more troubling roots; and a scene in which Boomer falls for a sentient self-service checkout has echoes of Her and somehow draws genuine sadness from its absurd premise.

A repeated visit to a gormless motivational speaker is one of the weaker elements of the show, despite being played with real gusto by Ross, but this is more than redeemed by a manically energetic Mafia scenario with the two performers pinballing between five characters, and a heartfelt ballad about a cough mistaken for a sneeze is a stirring finale.

Bread and Geller aren’t reinventing the wheel and work best when they slow down their manic energy enough for their sketches to have the biggest impact, but Prime Time is a hugely assured and impressive debut collection.  Expect a time slot closer to the show’s namesake next time they return.