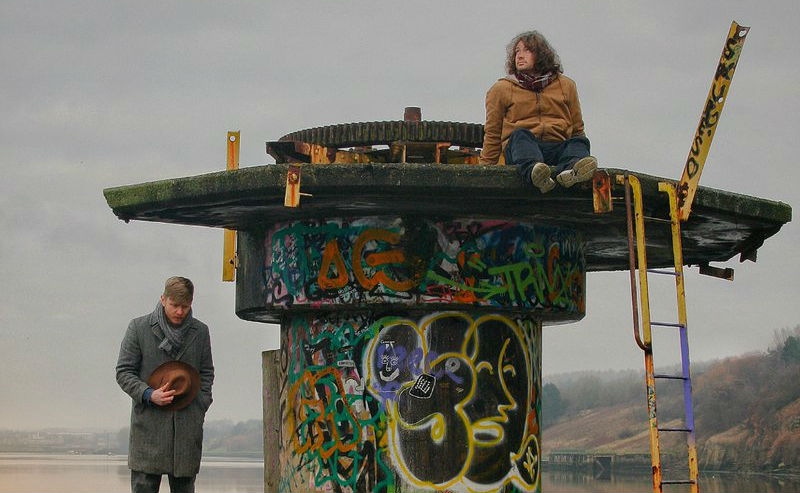 The small room at Stand 4 often finds itself home to hard-to-place comedy. Elaine Malcolmson dropped some extreme deadpan here in 2015. The acquired taste that is Will Franken did his bizarre Little Joe here in 2016. Kieran and the Whale could similarly be marked “not for everyone”, though there is something pleasingly creative about their Homesick Submarine Broadcasting Company.

We’re joining the pair of submariners on their underwater pirate radio show. Low lighting, a neon “On Air” sign and their unnecessary shades somehow manage to set the right tone. What follows, with Kieran (Rafferty) on jingles and the Whale (John Whale) on hosting duties, is a series of on-air segments of varying similarity to what actually might take place on a real-life late night radio show.

Rafferty and Whale make an unlikely comic duo. Whale is a scraggy-haired, laddy Geordie; this mellow alternative comedy is perception-shiftingly different to the conventional stand-up you might imagine him to do. Rafferty is an RP-speaking BBC type who has something of Tim Key or Alex Horne about him. His hotel lobby keyboard interludes make a nice counterpoint to Whale’s more audience-focussed material.

The best, and most stylistically representative, of their radio features is the meditation spot. If you do shut your eyes as instructed, Kieran lulls you into the zone, only for the Whale to intervene so it might not be as meditative as you thought. Comically bad psychic Johnny Spoonbender makes a good guest for the show, although in keeping with the low budget scheme of things, it’s basically Whale as himself, delivering it in the same manner he delivers everything, which stifles its comic potential somewhat.

The “letters from listeners” segments are also nice touches, as are the jingles, but overall the neat framing idea of submarine pirate radio seems to have potential that isn’t fully maximised. Sometimes the ideas feel like they have come from outside of the concept, rather than hatched within this watery hunk of metal we’re floating round in.

While not big on proper laughs, Homesick Submarine Broadcasting Company is not without a certain charm. It’s a rather more soothing late night comedy show than many, a comedy version of The Shipping Forecast before you call it a night.