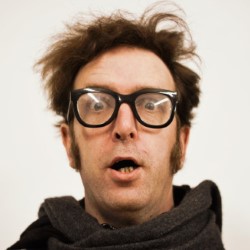 Character comic's trippy excursions are best when at their most satirical

Will Franken’s new show opens with a movie-style voiceover setting up the characters and scenario we’re about to see. It’s a straightforward enough intro, even if it’s off in its own weird world, but it takes some time before anything makes that much sense again.

And in some ways, that’s no bad thing. Franken’s trippy sketches take some fathoming, and seem disinterested in the bafflement they create, but are worth persevering with for the flashes of insight and the oblique perspectives they offer.

The title character is the least fathomable of all. Little Joe is a half-pig, half-rabbit that lives under water, a sort of mutant Beatrix Potter character invented by a flat-capped, mutton-chopped Yorkshireman. The man seems fanatically obsessed with the creation, and the power it has. In one scene, Little Joe is even able to take over the spirit of corporate execs in the middle of a sales meeting.

Another running sketch has a woman on her deathbed talking to her two doctors (who have the same name) about who she wants to play her in the movie about her death. What wider sense either sketch has isn’t obvious, and yet they bookend some strong satirical material whose targets and messages are very clear, even if the style is the same. Franken likes to take a pop at hypocrisy in all its forms.

A short sharia court scene makes a point about fundamentalist Islam’s treatment of women and homosexuals. But then Franken puts himself in the dock, using a couple of textbook New York lawyer characters to interrogate himself as a comedian for making these jokes. Among the evidence against him is a defacement of the Charlie Hebdo cartoon of the Prophet Mohammed. Is he mocking the Prophet or mocking the mockers of the prophet? It’s daring comedy that would merit a second watch as its flies by too fast.

There are other moments of great satire too. A Home Counties BBC type keeps rearing her head, first to stitch up a perfectly reasonable bloke to say the wrong thing about immigration, then to focus group a selection of the public who all want “the same old shit” serving up on TV, only in slightly different configurations. Given that Franken most definitely isn’t the same old shit, it makes his case very well.

In a Scottish domestic scene, an unreconstructed husband is letting his family starve because he won’t take his wife’s “woman’s money”. This time last year, Will Franken was Sarah Franken, so it’s interesting he has this Scottish husband become a woman for the sketch’s pay-off. Franken’s Scottish accent, like his Yorkshire, is shockingly bad, though.

Some musical interludes, including Elton John composing his last song on a plane that’s about to crash, sound better on paper than they are in production, but there’s good use made of music from the Beatles’ psychadelic days which fits the mood perfectly.

With Little Joe, Franken has created another reason for audiences to step outside the Fringe comfort zone. It’s strong and imaginative, and rewards paying attention as it wends its fantastical way. You just wish it could maintain the same level of satirical intent throughout.