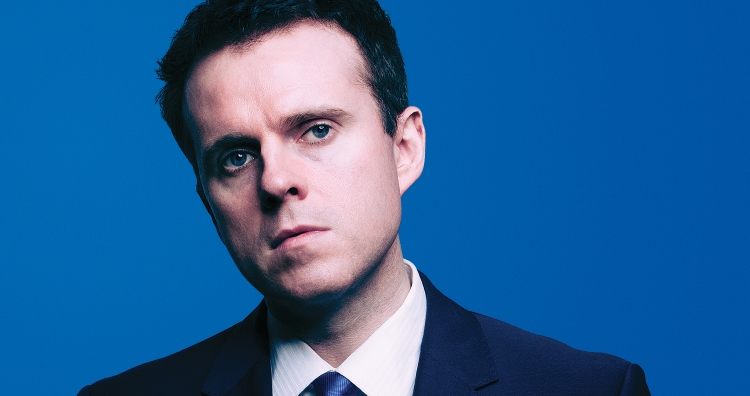 Andrew Doyle is being optimistic, he tells us. Shortly before cracking open a bottle of vodka and pouring himself several generous measures. He’s a man of contradictions. Mild mannered but waspish, respectable-looking yet radical, clean cut but cynical. It’s a while into the show before his positive facade truly cracks, but when it does the resulting tirade is fantastic.

Doyle is a masterful manipulator of an audience. His crowd work at the beginning slips seamlessly into his early patter. He’s totally unfazed by non-responses from the floor, working things up until he’s playing both a bunch of private school educated chaps on his left and a beefcake bloke on his right. The latter gets relentlessly flirted with throughout, but in a way which is a whole lot more sophisticated than the nudge-winkery of Alan Carr. Then at the end, he has an extended story which has the audience in pin-droppable silence. The punchline ought to be a groany one but the audience greets it with a belly laugh, knowing they’ve been well and truly had.

The show has a subtle dynamic to it. Early back and forth about Doyle’s extended family eventually gives way to a full-on tirade against the lazy left who feel that the working class and the old are now legitimately to be ridiculed post-Brexit. It sounds heavy but he’s already earned our ear. All the way, he’s been punctuating the hour with one-liners from his notebook, supposedly aimed at winning Dave’s Joke of the Fringe, but its real effect is to show a different side to his comedy, and ease us gently into the politics.

There’s some bitter griping about a public school type who has nicked Doyle’s gig on a forthcoming BBC political panel show. As the co-writer for Jonathan Pie, Doyle would certainly have the ability for it (actually, his own material beats you round the head less than Pie, so feels classier). It’s a jumping off point for a good section on the 7% (the privately educated), even if we’re left guessing as to the identity of the interloper.

This isn’t a show that leaves a strong aftertaste on the comedy palate, and that’s not a negative. Unlike the cheap Sainsbury’s vodka he demolishes, this one is smooth and refined, and Doyle leaves the impression of a man in full control of his comedy muse.