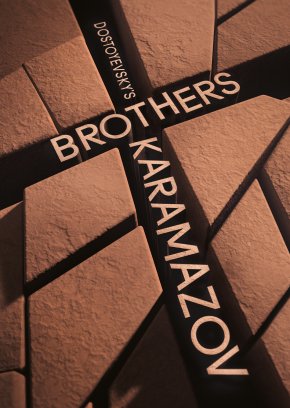 Dramatised by Richard Crane in 1981, this is an intelligently condensed version of the classic Dostoyevsky novel. The plot is simple: old man Karamazov is murdered for his money and one of his sons is the culprit. Murder, madness, relationships, the nature of humanity, the role of religion and politics all feature in an epic and heady mix from the source text.

With only four actors onstage throughout, you’d be forgiven for thinking that such an approach shouldn’t work – but it’s a triumph on many levels. Barefooted throughout (apart from one symbolic use of a pair of socks), Sean Biggerstaff impresses the most in the role of intellectual Ivan, brooding and arrogant towards his possibly bastard half-brother Smerdyakov (a deliciously obsequious, warped and rather unsettling Mark Brailsford). Thierry Mabonga is a beautiful and funny Dmitry, the hedonistic son in the family with a voice that could melt honey. Tom England has the slightly thankless role of pious son Alyosha, but is no less impactful as a result.

But that’s not all; at various points our actors don other garments to symbolise they are now playing other characters, including the Devil, some comedy tarts and a Grand Inquisitor. Notably, a fur coat is worn to represent the presence on stage of old father Karamazov, appropriately making the rich, lecherous and frankly appalling old man look like some stereotypical pimp. Mabonga is most impressive in this coat, wrapping himself up in the gaudy garment as he crouches and spits towards the audience, “Ashamed of filth? You should try it – it’s delicious.” Sadly his brief spell as the Devil isn’t quite as nuanced; embodying as it does the slightly camp mannerisms of his Dmitry, there’s no real differentiation.

All of this plays out on a set staged like a brutalistic child’s jungle gym. Arranged in a semi circle around an earth-strewn floor, actors clamber up and down for dramatic effect while the chairs are later rearranged to represent a courtroom. It’s simple yet highly effective: the mud being the earthly constant which taints all action (regardless of location) with a sense of grim futility.

Rather less successful is the structure; Act I is front-loaded with exposition and too much 19th century philosophising on the nature of religion. There is also an awful lot of chanting from our actors, which starts to grate and doesn’t really work as a transition device. Fortunately, less singing is present in Act II, which begins to focus far more on plot and character in the wake of the murder. A blood-splattered Mabonga, drunken on the table and spouting all sorts of flippant and contradictory nonsense – “relevant” or not – is a highlight.

With the coat of their father hanging over them like an oppressive ghost, things build and build to a dramatically electrifying conclusion – the final fade to black is entirely appropriate.