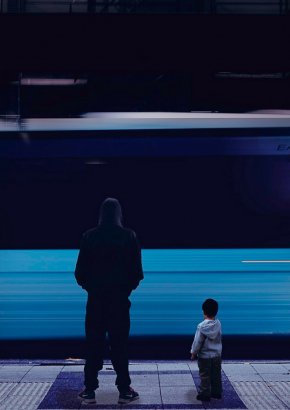 A carefully-constructed exploration of male vulnerability

As part of the Scottish Mental Health Arts Festival, Bijli’s production One Mississippi presents a carefully-constructed study of mental health amongst the UK’s male population. Inspired by a series of interviews with men across Scotland, One Mississippi is a brutally honest portrayal of male isolation, self-destruction and suicide.

While the characters they depict onstage may find themselves vulnerable, there is no weak link in this all-male cast. The four actors match each other’s intensity, frenetically moving about the stage as they interact with one another. Their individual experiences become one as they express feelings of alienation, desperation and anger. Stories of drug addiction, self-harming and violence all characterise these tales, evoking the utmost sincerity and respect for those who inspired these scenes. The actors effortlessly move from one account to another – from cultural conflicts to familial pressures, blending their stories into a visceral and highly emotive exploration of struggling to fit into society.

Remarkably, the actors don’t allow the issues at hand to suffocate the show’s mood. There are many hilarious moments as the characters depend on memories, including moments of their childhood or even a bender gone awry. There is on some occasions a danger of allowing comedy to undermine the show’s enlightening aim. At first, Adam Buksh’s character – a Buffy-loving, gay Muslim from Edinburgh – feels somewhat one-dimensional, a token camp guy acting as a much-appreciated source of comic relief amongst the harrowing tales of violence, drugs and alcohol. However, writer and producer Mariem Omari manages to reign in the more humorous moments, undercutting these scenes with visceral, solemn scenes. Through Buksh, Omari goes on to effectively explore the conflict between Islam and homosexuality.

Despite the impressive character development produced in a mere 75 minutes, the play becomes problematic when considering the dialogue it creates about mental health. At times it feels like One Mississippi implies that mental illness is only born out of incredible hardships. Witnessing the relentless suffering these four men endure, it’s no wonder that they feel cheated by the cards life has drawn for them. Yet, the play fails to portray mental health issues as something that can happen to anyone, no matter how good their upbringing and surroundings may be. Dramatic tension becomes a focus at the expense of a well-rounded (albeit unexciting) depiction of mental health.

The meaning of the title becomes clear only in the final seconds of the play, as we are suddenly abandoned by the four men we’ve just gotten to know and connected with. While the fate of all four men is somewhat ambiguous, the resonating feelings of dread imply that there are no happy endings. In its final moments, One Mississippi grounds itself as a powerful depiction of four men who have long struggled to fit into society, adopting an admirable approach to tackling mental health issues. You will find yourself clinging onto the characters’ final moments, afraid to let their stories end.