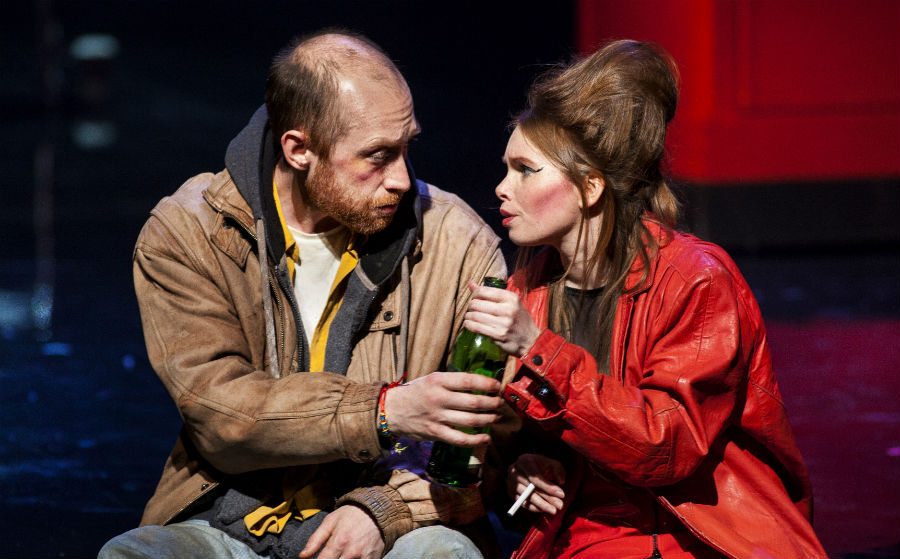 Douglas Maxwell's boozy fantasia is no easy drinking but gives a buzz.

Our main protagonist tonight has some advice for teenage drinkers. Drink lager, not sweet stuff. You’ll get the buzz, but you won’t crave the taste as much. The play that bears his name works similarly. It has all the desired pleasant effects, but you have to have the palate for it.

Charlie Sonata’s characters are idiosyncratic, its resolution fairytalesque. It’s a boozy fantasia on death, nostalgia and friendship, by Douglas Maxwell, a play you’d want to watch again having fully adjusted to its cadences, or possibly a few sheets to the wind yourself.

Chick, Jackson and Gary (Sandy Grierson, Robert Jack and Kevin Lennon) are old Stirling University pals, now in their 40s. Chick, otherwise known as Charlie Sonata, remains a beautiful soul to his friends, but he isn’t well. His path has never led him away from long, drunken nights, and instead to an itinerant life in London, and a girlfriend of sorts (Nicola Jo Cully) who is as ill-suited to relentless reality as he is. He’s back in town to “help” Gary and his wife Kate (Kirstin McLean) whose daughter Audrey (BAFTA scholar Lauren Grace) lies in a coma after a car accident. Chick’s predicament, it turns out, is no less perilous.

The play survives on feel rather than coherency, and the effect is intentional. Like the beer-soaked nights it emulates, scenes stand out, but connections between them blur in time and space. Among the most vivid is Chick’s expert drinking advice to Audrey – a touching, funny, unlikely source of bonding between drunken uncle and misunderstood teen. Equally affecting, but for different reasons, is Kate’s bedside reflection on motherhood, in which she compares her own parenting experience as a woman who gave birth young with those “hippies” who’ve left it later.

Narrator Robbie Gordon is a critical factor, injecting doubt into what we’re seeing with his repeated query, “can this be right?” Many of his lines could be considered superfluous, but Gordon’s dreamy detachedness in delivering them is key to establishing the tone of the piece. Equally important is a thread in which Sleeping Beauty is evoked. Meredith (Meg Fraser), the sister of Audrey’s doctor (Barnaby Power), is, for convoluted reasons, in costume as a fairy from the ballet. She begins to equate Audrey with the sleeping princess and Chick with the handsome prince who will save her, using the pisshead logic which sometimes turns out quite astute.

Nostalgia plays a major role too, particularly the pining for teenage freedoms in which some responsible adults indulge. At one point, 1994 versions of the trio loll around a student union bar, expounding an arcane theory about Kurt Vonnegut, the tenets of Britpop and the recurrence of the 1960s. Some will shudder with the recollection of pub bores past, some will be scratching their heads as to what a Dog Man Star is. Others, the likeliest target market for this material, probably aren’t in the audience tonight. It feels like a play from another stage. Not necessarily a bad thing if the intent is to shake up the Lyceum audience.

Grierson is the pivot around which this play spins though. He does an awesome drunk. His swaying is beautiful, his bleariness epic, the swell of his chunder can be felt in the stomachs of the audience. His speech, punctuated by ” ‘hingummy” and “know what I mean?”, has poetry to it. It’s an excellent turn.

Over the course of two hours (no interval, beware), an expectation builds that the mix of hazy, drunken reverie and lucid reality will somehow resolve into 20/20 clarity. It never really does. However, what has actually happened matters less than the emotions that it has stirred. Programme notes reveal the origins of the play in the personal experiences of Maxwell and director, Matt Lenton, and committed drinkers of any kind will have encountered a man like Chick. Something will trigger your own memories, even if you’re left wondering about the relevance of certain scenes. For its moments of drunken beauty, Charlie Sonata is worth the hangover of ambiguity.