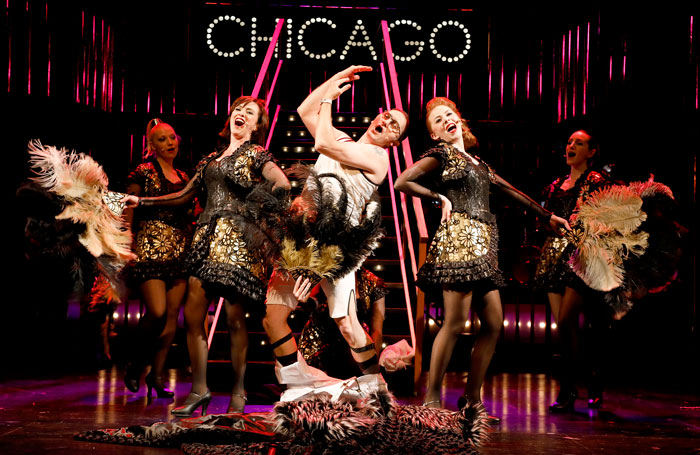 Chicago is part of musical theatre legend. The West End revival became the longest-running American musical in West End history, the film version won the 2002 Academy Award for Best Picture, and numerous productions have toured extensively in the United States and United Kingdom. Pitlochry Festival Theatre has taken it on and is currently playing to packed audiences with an extended run to the end of their season.

The musical is based on a play of the same name by reporter and playwright Maurine Dallas Watkins, who was assigned to cover the 1924 trials of accused murderers Beulah Annan and Belva Gaertner for the Chicago Tribune. in the 1960s, Gwen Verdon read the play and asked her husband, Bob Fosse, about the possibility of creating a musical adaptation. John Kander and Fred Ebb began work on the musical score, modelling each number on a traditional vaudeville number or a vaudeville performer. This format made explicit the show’s comparison between “justice”, “show-business”, and contemporary society. Ebb and Fosse penned the book of the musical, and Fosse also directed and choreographed.

What a challenge for director Richard Baron and choreographer Chris Stuart-Wilson. Stuart-Wilson’s approach certainly works for the Pitlochry ensemble. Having choreographed many musicals over the years for the theatre, he has taken on the Fosse style and made it his own. And what a change from the star driven West End productions which often lack soul and verve, with the audience only coming to see the latest Hollywood import.

Both leading ladies – Lucie-Mae Sumner playing Roxie Hart and Niamh Bracken playing Velma Kelly –  give outstanding performances, taking on the iconic set pieces with energy, great singing and characterisation. The West End calls ladies! The ensemble provide slick support, moving the prison grills and central staircase around with ease. The set sparkles with Broadway lights and the ten-piece band, led by musical director David Higham relish the opportunity to play the great songs by Kander and Ebb. How good to hear play off music as the audience stream out singing the hits.

Mention must be made of Carl Patrick playing Billy Flynn like a sleazy version of Frances Underwood in House of Cards, always manipulating the press and his clients. And fresh from playing Valentine Brown, Alan Mirren gives us a wonderful interpretation as the hapless Amos Hart with one of the best performances of Mr Cellophane around. Irene Myrtle Forrester struts her Sophie Tucker as Matron ‘Mama’ Morton with strong vocals and Alex Scott Fairley minces, warbles and gets the laughs as Mary Sunshine.

The ensemble work their socks off in fishnets and diamante waistcoats and the overall result is an evening of musical joy. It’s a clever and original production which the audience adore.