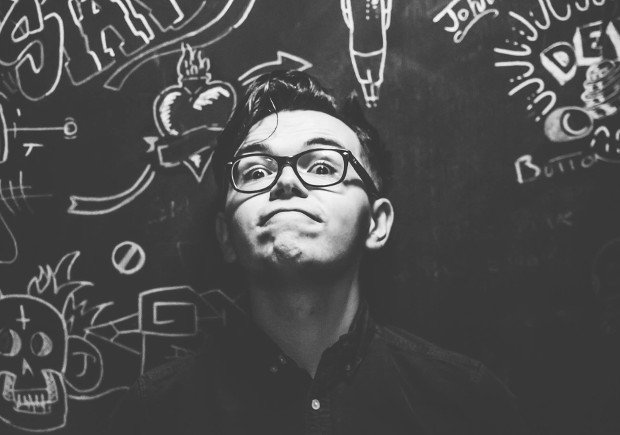 Christopher Macarthur-Boyd
The Boyd With The Thorn In His Side

Glasgow’s Christopher Macarthur-Boyd is now a familiar sight on the Scottish comedy circuit, a sight that looks like Ronnie Corbett doing a fancy dress Morrissey, with the likeability of the former, and none of the foot-in-mouth tendencies of the latter. This is the last night of his first Fringe run on his tod, up in the rafters of the Gilded Balloon’s new Rose Theatre. And what a night to be doing it – the festival finale fireworks providing a constant soundtrack, exploding inconveniently every time he’s setting up a joke.

It evidently bothers him a lot more than it bothers us. He says it throws his timing out. And no wonder. It must be like trying to do your drum fills when someone’s putting up shelves next door. For all it disrupts the set, though, you’re never in doubt that this is anything more than a good comic struggling against the elements. His skill shines through despite the best efforts of the pyromaniacs at the Castle.

He claims the show is on his foreboding about the imminent end of the world. How much of this material actually fits the theme is debatable. (There’s even less about Morrissey, in case the title wooed in any gladioli-brandishers).

Instead, we get some good stuff on his grandparents unwitting “racism”; Grandpa Mac-B gets caricatured very well, through mannerisms and accent. Then there’s the girlfriend breakup – familiar territory, but he does well with it, and gives us a good euphemism for erectile dysfunction. He talks us through his tattoos, which are funny on the reveal, but also give us a nice insight into Macarthur-Boyd himself. As he warns on his Fringe listing, “I might take my top off, but not in a sexual way.”

A recent trip to Australia leads him into white guilt territory. It’s a bit worthy in the build-up, but leads to a good punchline. He also has an excellent rule of three joke about things he might have in common with Trump.

So, through the pandemonium breaking out across the Norloch, Macarthur-Boyd still comes out winning. There’s laughs to be had and there’ll be plenty more to come from him in future Fringes, especially at gigs where he can hear himself think.