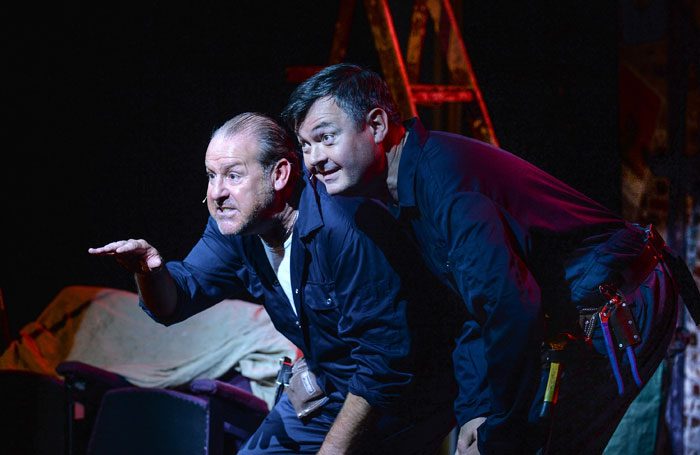 As builders working on an abandoned cinema, Fringe veterans Andy Gray (Mikey) and Grant Stott (Davy) take the audience on an initially entertaining and nostalgia-filled journey filled with recreations of scenes from classic films such as Jaws, Batman, The Ten Commandments and Star Wars. They also reminisce about the good old days of cinema-going, from the chewy toughness of the pink nougat to the hard-as-nails usher forever searching with his torch, the attractive ice cream girls and the randy manager using any excuse to chat up a woman.

Gray and Stott both entertain the audience with their delvings into memories past, a particularly hilarious example being a recreation of the horse’s head in a bed scene from The Godfather. It also helps that the two have sufficient chemistry to play off each other, with Phil Differ‘s script providing them with sparky, witty dialogue that plays to their comedic timing.

However, the final section of the show, where the repeated motif of Mikey’s phone ringing is resolved, reveals the true impact of films on Mikey and Davy’s lives as well as providing an encouragement not to live in the past.

This is a gradual tonal shift that pays off thanks to performances of Gray and Stott, as well as Differ’s writing. It carefully handles what could have been a jarring change that could have alienated the audience. Both men are able to give equal energy and conviction to the play’s comedic and dramatic moments without faltering and are able to pull off the tonal transition skilfully and seamlessly.

Double Feature is a well-written piece that not only uses Gray and Stott’s comic timing to bring to life the memories of the golden age of cinema-going and of movies past, but also shows how these memories can be used to blot out and overcome more personal tragedies.