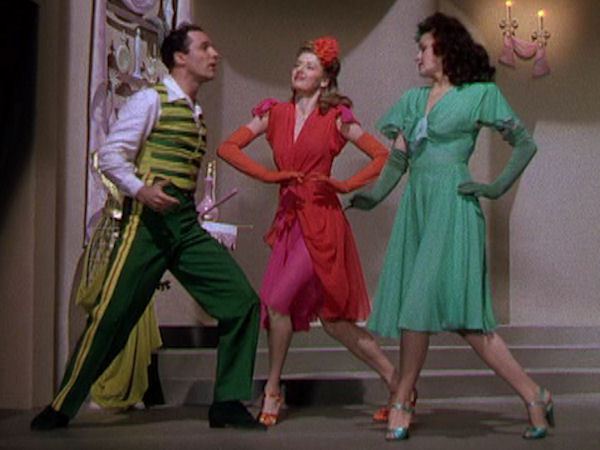 Lesser 1940s Technicolor musical that has moments of magic.

Lesser 1940s Technicolor musical that has moments of magic.

‘What does a young girl think about when she’s going down the aisle to be married?’ asks woman’s magazine publisher (Otto Kruger).  His female editor and photo editor shoot each other a hilarious knowing glance. These magazine people are hunting for a cover girl of the wedding issue and the most likely candidate is Rusty (Rita Hayworth).  She is hoofing at a Brooklyn burlesque club and her choreographer and paramour (Gene Kelly) is sure Rusty is going to take shortcuts in her career only to be disappointed and he will ultimately lose her. Phil Silvers plays the show’s MC and acts as gooning comic relief.

The magazine’s  publisher sees similarities between Rusty and a woman he met when he was a callow youth. An agonising fin-de-siècle flashback ensues. There are some magical moments in this glorious Technicolor musical, especially in a sequence when the young Kelly – this was almost ten years before Singing in the Rain – dances with his own reflection which jumps out of a shop window. The music is by Ira Gershwin and Jerome Kern but these are not their catchiest songs. And redheaded Hayworth never looked lovelier, thanks in part to her rollicking new husband at the time, Orson Welles.

Rusty falls for the rich theatre producer, not Kelly’s hoochie-coochie man. There’s humour, gorgeous colours and fantastic costumes (by Travis Banton). Eve Arden plays the super chic super-bitch fashion editor with an outré taste in hats. The movie’s alternative title might be The Devil Wears Balenciaga. And all this goes a long way to make up for the film’s failings.

Sadly it is a flawed picture. So much so that a lot of the plot doesn’t hang together. Too many elements jostle for the viewer’s attention. American G.I’s wanted to see Hayworth’s gams, not 1940’s supermodels swanning around interminably in matching collars and cuffs. Had the film been made by the classier MGM it would have been something altogether better.

But this piece of utter frivolity must have truly lifted audiences out of the gloom of World War II, and Rita Haworth’s smile still lightens up the world today.