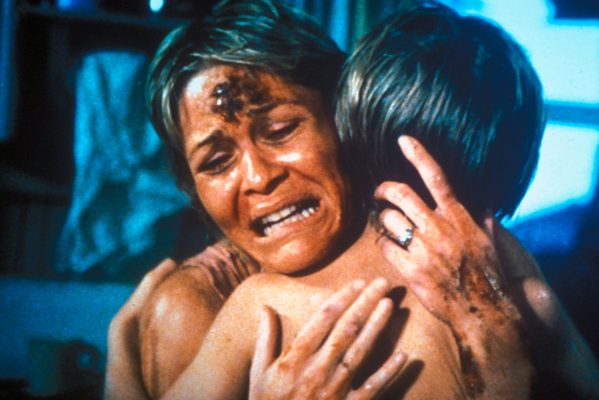 From the opening scenes of a bunny and a St. Bernard frolicking in a soft-focus meadow you know things are going to go badly. Vic (Daniel Hugh Kelly) and Donna (Dee Wallace) Trenton and little son Tad (Danny Pintauro) are like a white-bread family from TV commercials. They have a beautiful clapboard house with a picket fence and views of the ocean straight out of Edward Hopper – and an enviable red E-Type Jag.

But under the surface all is not well. Donna is having it off with the local carpenter and stud (Christopher Stone) and Vic’s business is threatened, while whiny little Tad has night terrors. Meantime Cujo the dog, owned by local trailer trash, has been bitten by bats and has a sore on his nose that looks like strawberry jam. The story’s based on a Stephen King novel and it has to be said the book is better.

This witless movie has its adherents (it’s a “cult film” after all). Fans will love the extras even down to the interview with the dog trainer. The general population will wonder what the fuss is about and quite why this cinematic enterprise is so deserving of the portentous two-disc-and-hardbound-slipcase treatment.

It’s not a patch on other shockers of the time – like Jaws (with which it has more than a passing resemblance) or Poltergeist. What’s lacking is pace and tension, an enjoyable script and rounded characters. Perhaps inevitably, the audience’s sympathies go out more to the creature (unlike Bruce the shark) than the humans. Dee “Scream Queen” Wallace plays mom in jeopardy well but has a pretty thankless role.

While the husband swans off in his E-Type she is left with a heap-of-junk Pinto which, of course, breaks down. The cardboard men in the story, who are so keen to use her, are not to be seen when she really needs help. Of course. The plot hinges on a prolonged – and particularly nasty – sequence where the dog, covered in studio slime, assaults the woman and child trapped in the immobile vehicle.

Perhaps seeing mom being tortured is what juvenile audience members got (and maybe still get) out of the film.