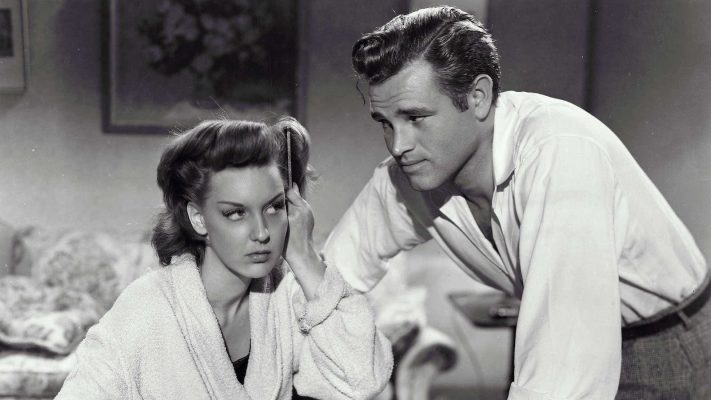 Being good at your job. It’s what most of us strive to be. Ulmer was hugely successful – so much so that he couldn’t break out of Poverty Row – the realm of the B-picture – and make the Big Time. Hollywood was hungry for low-budget movies to accompany the main feature and Ulmer was able to provide excellent, popular short films made quickly, cheaply, on budget and with no big stars. He was well rewarded. In his finest (and best remembered) movie Detour, the spiv’s car (a stylish Lincoln Continental cabriolet as big as a lifeboat) was the director’s own.

Al (Tom Neal) is a honky-tonk piano player in New York whose girlfriend Sue (Claudia Drake) has gone to LA to seek her fortune. His randy pangs make him decide to join her even if it means thumbing rides all the way. But as Al runs low on funds – “You know, that stuff you can never have enough of,” – his luck improves when he gets a lift in that snazzy Lincoln convertible.

Detour has all the noir genres tropes (the flashback, the shadows, the foggy city, the narrator’s voice, mistaken identity, and the dangerous dame), and the script oozes with oodles of hard-boiled zingers that would be the envy of “perv noir” fan James Elroy.  Al says to Sue, “Let’s blow the joint,” (leave) and she, we are told in voice-over, becomes a Hollywood hash slinger which is a job that “beats polishing cuspidors”. It’s such a delicious gem of a movie it’s difficult to believe it was made in only six days.

An accident means he falls heir to the car and the driver’s (Edmund McDonald) identity. When he picks up hitchhiking Vera (Ann Savage), a woman barely out of her trashy teens but who has seen enough of the world to be bitter and cynical, it turns out she’s encountered the spiv and his wandering hands before. She knows Al’s up to no good and she has a crackpot scheme to set the pair up to net a fortune. Their secrets manacle them together in a seedy motel room but bad luck and the Fates are watching over them.

The contrived plot is as dodgy as the back projection but it matters not a bit. Subsequently, the film was a huge influence on many filmmakers including Roger Corman, Joe Dante, and Wim Wenders. Savage’s spitting-cat performance is one to relish. There’s also some wonderfully fluid camerawork that predates the Steadicam by 30 years. Thus, there’s not an ounce of slack in the plotting or script (Martin Goldsmith) and the action moves along like the well-oiled V-12 under the cabriolet’s bonnet.