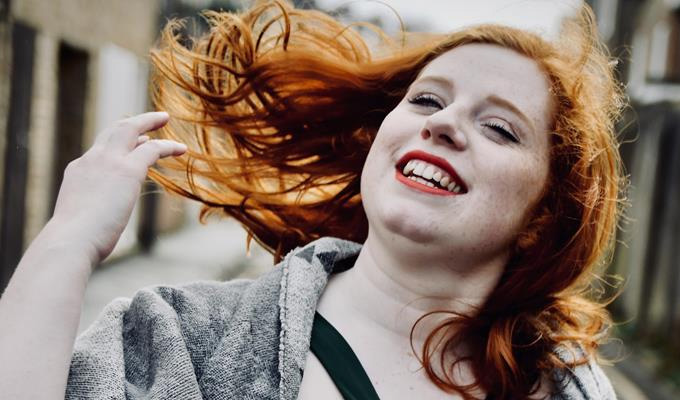 Dancing on to the stage in an elegant red dress, high heels and ritzy diamond earrings, Eleanor Morton announces that she has re-invented herself, the person on stage is Eleanor version 2.0 – a more confident and glamorous comedian than the previous incarnation. She affects a transatlantic accent as she drops some punchy one liners and sassy gags about sexual exploits, smear tests and expensive psychiatrists – the kind of jokes she imagines this type of more ‘TV ready’ and commercially successful female comedian would tell. Precisely who she is pastiching at this point is unclear – it doesn’t seem to be an instantly recognisable type. There’s a hazy and problematic implication that all popular female comedians are ones who adhere to, rather than challenge, patriarchal ideas about femininity, but this implication is never really justified and is almost contradicted by some of the gags themselves.

Thankfully, Morton breaks character and discusses some of the ways in which this new persona is intended to illustrate the continued pressures faced by, not just female comedians, but women in general. She addresses a range of hypocrisies and injustices affecting women, particularly their objectification by the media, in the workplace and in sport. As feminism in the wake of #MeToo and the Harvey Weinstein scandal is one of the hot topics at this year’s Fringe, there are a few points where the originality of the material appears a little questionable at first, but just as you become suspicious you’re about to hear something you’ve definitely heard several times before, Morton will present an anecdote or new spin on the topic that proves the relevance of her ideas and the freshness of her voice.

Morton’s introduction of a second character, Sad Male Comedian, provides an amusing counterpoint, presenting some of Morton’s concerns from a position of male privilege. He doesn’t have to worry about his appearance, he is prone to mansplaining and, apparently impervious to self-doubt, he complains about not getting enough media attention, despite having a show at the Apollo. Morton’s inclusion of the trait that he “uses a depression diagnosis to seem interesting” gets a laugh, but seems contrary to the feminist perspective she’s given the show. Surely men discussing their mental health concerns is to be encouraged in order to combat the very same damaging expectations around gender that Morton is critiquing?  Again, Morton seems to be presenting us with a character that is perhaps less a familiar ‘type’ than a version of an individual Morton herself has encountered. Either way, the rendering is entertaining and adds value to the show, but would benefit from a little development. The inclusion of Sad Male Comedian also happily provides the opportunity for a novel wee cameo by Paul ‘Silky’ White, in an unexpected twist indicative of Morton’s inventiveness and imagination.

The other topics Morton covers present a similar threat of being well-worn – for example, the exploitative nature of reality TV and the racism of older generations. However, these sections prove to be some of her strongest material, showcasing Morton’s intelligence, insight and creativity with a high degree of success.

Morton’s reasons for writing a show focusing on the oppression of women are made clear to the audience when she refers to the death of Eurydice Dixon, a 22 year-old Australian comedian who was raped and murdered as she walked home from a Melbourne gig in June. This reminder from Morton about the continued vulnerability of women lends the show some gravitas, and reminds us of the enormous significance of the issues she is discussing. The reminder of this context has a powerful impact on the audience. As Morton says herself: “It’s good to be funny… but it’s better to be on the right side of history.”