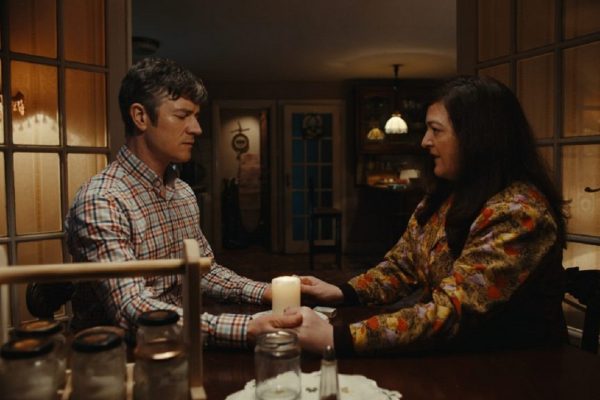 If there’s something strange in your neighbourhood, the last person you’d call is the driving instructor, right? Well, in quaint, middle-of-nowhere Ireland, this is precisely who to reach out to for all your ectoplasmic queries. Where other than rural Ireland could you stumble upon satanic rituals, pernickety ghouls, and humour in death? The perfect setting for Extra Ordinary, unassuming horror-comedy surrounding grief, regrets and farce.

Cult status, it’s a prize some deem worthy for a piece of cinema. One can’t shake the feeling, that this is what is instore for Extra Ordinary, at least in a minor sense. This unashamedly self-aware horror meets romantic-comedy knows precisely the story it wants to tell, and is only tumbling slightly in execution. Rose is a driving instructor in (very) rural Ireland, with one unique talent – Rose can communicate with the dead. A gift she shuns out of regret in having a part to play in her father’s death. That is, of course, until Martin Martin requests an exorcism.

There’s a surprising finesse in portraying banal – especially in a film which draws humour in the deceased. Martin Martin is now a widower with a teenage daughter to raise, his deceased wife Bonnie regularly haunting, possessing and generally being a pain in the arse, even in death. Barry Ward grounds the performance, which heightens the otherworldly aspects surrounding the character, but equally as capable in delivering hilarious physical comedy.

In the absolute reverse, Ahern and Loughman’s decision to cram a part of the narrative with, what they perceive, as twists and excess, costs the film an otherwise near-perfect package. At first, the doily coated Exorcist is a quaint, zany comedy, bolstering an oddly sweet gallery of characters, who plunge headfirst in foiling the antics of Will Forte as Satanist Christian Winter. Less a Faustian terror, more bumbling sitcom neighbour, the direction here fumbles as the comedy which put the fun in funeral, now seems intent on shoehorning tension, the over-the-top drama becoming more transparent than any supernatural creature.

Their saving grace, Maeve Higgins as Rose, carries such sincerity it’s easy to surrender to the lunacy of the script. The delivery plays into Extra Ordinary’s style, with its lashings of classic horror references, screwball moments and vintage VHS requiring a team able to ground the film, yet maintain momentum and world-building. No one excels at this better than Higgins, who captures an authentic sense of humour, concealing the loneliness she feels. This tenderness from Higgins demonstrates Ahern and Loughman’s written capability, marrying ludicrous comedy with fragility. Rose often identifies with the spectres she communicates with, unseen, unloved and alone, whilst Martin Martin’s throw-away line about “speaking with anyone,“ even a driving instructor, opens the doors to a frankness about death.

Visually, the set dressings and props reinforce an aesthetic, but cinematography limits itself to practicality. No reason to stretch for an art-house feel, there’s a distinct lack of manipulation or attempt at framing Extra Ordinary outside of medium or close-up shots. Instead, focus shifts to effects; notably the hazy, VHS 4:3 aspect segments which break-up the acts of the film, complete with title cards and choppy audio. They’re excellent visual gags, which hark back to those cassettes all shelves had, but with no origins materialising from nowhere.

Ahern and Loughman’s Extra Ordinary conjures those wicked nostalgia demons of the mid-eighties to the early nineties. There’s more than a fleeting similarity to the spirit of Edgar Wright or Stephen Volk, but Ahren and Loughman’s film is certainly of their conception, a determined pastiche comedy with as much life as it has a love for both horror and comedy.