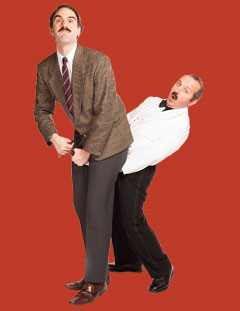 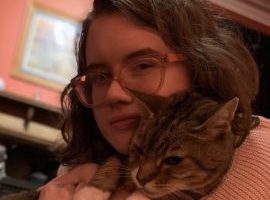 A long-running, classic show, Faulty Towers The Dining Experience seems a perfect fit for the oddity and downright insanity of the Fringe.

The show begins before we enter the dining room. Basil, Sybil and Manuel treat us to a ridiculous parade of jokes that, though simple, are executed so well it has the crowd guffawing the whole time. It only gets better from here; as we’re seated, there’s a rising excitement in the audience that is definitely fulfilled by what’s to come.

I am certainly surprised at how brave the trio gets with their humour. Several of the gags include clambering on tables as people are eating, dragging them from their seats and crawling beneath tablecloths. But the crazy, unbridled energy of these centrepiece jokes aren’t what proves the actors’ competency; it’s the improvised jabs they make at the audience. Everyone in the room gets a taste of the group’s skills, and their quips are so wonderfully in character that I can’t help but be amazed.

Of course, a key part of the performance is the food, being that it is a dining experience. It definitely feels like the meal is meant as background for the show rather than a centrepiece, though it is rather tasty. This would have been forgivable if the prices aren’t so expensive – a ticket for the show is 50 quid a pop! However, the menu is suited to the time period of the show, and the layout of the tables (at ours we have either only forks or knives with each placemat) and the stuttered way that the food is served is exactly what I’d expect from Fawlty Towers’ haphazard management.

It’s extremely evident how much love and care has been put into this show. Each performer clearly knew their role down to the letter and pulled off minor slip-ups with improvised ease. But parts of the experience could easily be elevated, and I do hope that the show isn’t settling into its comfortable decade-long running and is instead aiming to upstage every performance with the next.