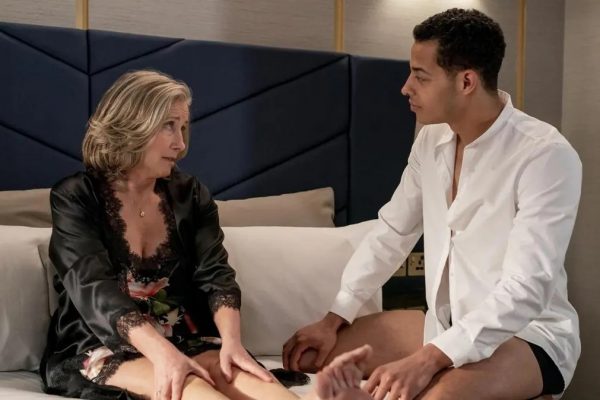 Good Luck To You, Leo Grande

Comedy with a wholly familiar, but reinvigorated voice

People older than you have sex. Shockingly. And despite lacking representation, older women have desires, passions, lusts, and needs. Yet a stigma surrounds stories of older women and sex and is never approached with the same lustre associated with traditional rom-coms, littered with the unblemished bodies of twenty-something year-olds. Really, the perceptions surrounding older women and sex is the last social taboo mainstream filmmakers seem unable to overcome.

It appears that the intention of writer Katy Brand’s Good Luck To You, Leo Grande is not to revolutionise with shock, but to slot the film comfortably alongside others of its ilk. To present the story of a widow looking to experience the one thing her life has failed to produce: pleasure, with a nonchalant intention to demonstrate just how common this form of narrative should be.

And though similar examples, such as recent British pieces Last Tango in Halifax and 45 Years, or German film Cloud 9, these instances of narratives surrounding older women looking for a tumble are exceptionally few, far between, and significantly (in Hollywood) played off for extreme comedy. And where Good Luck to You, Leo Grande certainly leans into self-deprecation and humour, there’s a degree of chemistry and integrity to the writing. Playing with the dichotomy of a person who fundamentally ‘gets’ pleasure, and another who has never experienced it, much of the film builds along with the misunderstandings Leo and Nancy unpack as the latter grows more comfortable with the idea of paying someone for sex and coming to terms with their bodily autonomy.

And what Leo Grande has going for it in droves is marvellous performances – Emma Thompson zoning in on the sincerity and trepidation Nancy feels in embarking on a post-marital sexual exploration, at first of another person, and finally herself.  Brand constructs sex worker Leo Grande as someone who understands the microcosms of his work, of fulfilment – both in the literal sense and in the intimate nature of emotional satisfaction. Sophie Hyde’s direction keeps Daryl McCormack from oozing too much into the suave or debonair Hugh Grant instance, with a basis in reality and addictive charm which finds audiences attempting to book his services themselves.

Realistically, many of the intimate scenes between Leo and Nancy are communicative rather than physical – though Hyde has no qualms demonstrating the physicality of the pair’s connection. Gradually this grows, with cinematographer Bryan Mason shielding much of Nancy’s initial discomforts through dimmer lighting, gradually brightening the closer she comes to her own realisations of her family, life, and self-gratification.

Despite the significantly authentic and investing performance, limitations in the film’s structure arise with the haste in which grievances are negated, something which, given the onscreen chemistry and connection of Thompson and McCormack, is effectively dispersed quickly by Hyde and Brand – but leaves the film missing a snippet before the pair’s final meeting.

In a world where filmmakers go to extraordinary lengths to cover every conceivable aspect of sexual taboos before tackling this last one, Leo Grande is a necessary and overdue revolution in representation. Quintessentially awkward, Brand’s narrative maintains as much of the disarming British charm that she circumvents. It makes for a film that, while feeling wholly familiar, is speaking with a reinvigorated voice.