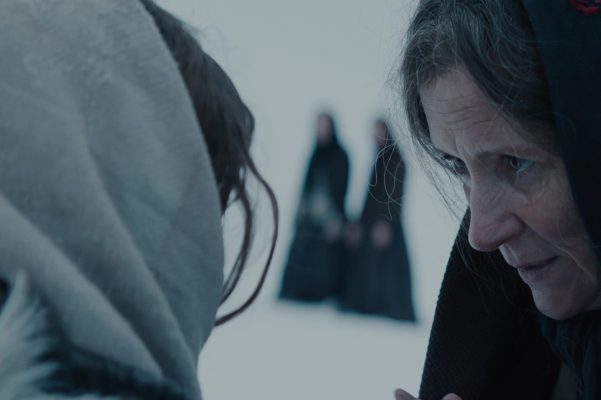 A folk horror about isolation is perhaps not an easy sell in these strange times of enforced social distance. Even in normal times, the slow, almost ambient chills found in Lukas Fiegelfeld’s debut Hagazussa would be something of an acquired taste. That said, this tale of madness, misogyny and mushrooms set in the remoteness of the Alps in the 15th century is a haunting and immersive experience. A dark fable that feels ripped directly from the pages of a grimoire in a dank and ancient library, it’s a curiously beguiling vision for those who can adjust to its almost tidal rhythms, even when it ventures into the mind’s most abyssal places.

Albrun (Aleksandra Cwen) is a goatherd who has lived in the same hut, on the outskirts of an alpine village all her life. Apart from her baby girl, she’s isolated from all others in her village and has been so since her mother died gurgling and delirious from plague fifteen years earlier. She’s always been suspected of being a witch so finds it easier to keep herself removed from what passes for polite society. A friendly woman and the local priest attempt to bring her back into the fold, and the shy, circumspect Alburn begins to respond. But what motives are at play?

Hagazussa bears comparison with other films in the recent wave of folkloric period chillers dealing with themes of superstition, isolation, madness and paranoia. Robert Eggers‘ puritan horror The Witch is the obvious point of reference, but there is also the cultural specificity and unique sense of place of Rainer Sarnet‘s gorgeous and demented Estonian pastoral piece, November. Feigelfeld’s grim vision lacks the eventual sense of ecstasy of The Witch or the jocular Luciferian mischief of November however. There is little lightness here, even with cinematographer Mariel Baqueiro teasing out the beauty of the gorgeous alpine sun.

The life of its protagonist is a trudge, and the film moves at that same torpid pace. We tend to associate being in tune with nature with positivity and serenity. Here, Albrun’s affinity with her environment is one of wariness and respect. Her alpine surroundings consist of foreboding woods, frigid winters, swampy marsh, maggots crawling amid fungi, and snakes coiling around corpses, which the film captures in lingering detail. The sensuous, earthy visuals are complemented by a stunning score from ‘Chamber Doom’ duo MMMD that feels like an invocation of the frequency of the Earth itself. Sometimes no more than a subtle unsettling drone, sometimes rising into crescendos of hair-raising choral litanies, its funereal minimalism and tectonic tempo ensuring a constant sense of unease, even if the film never gets genuinely scary. Despite its occult trappings, the central source of horror is grounded entirely in the corporeal, and Aleksandra Cwen plays it to the hilt in a performance of remarkable physicality.

Presented almost as a dark symphony in four movements; Shadow, Horn, Blood and Fire, Hagazussa feels like it taps directly into the medieval period – its violence, filth and superstition – in the same way that Ingmar Bergman managed in The Virgin Spring. Albrun is dismissed as a witch (the film’s title means ‘witch’ in Old High German), yet there is very much a strongly pagan element that still permeates the area. The threat posed to Albrun as a child by three men cloaked head to toe in animal skins is in no way Christian, and the priest conducts his business from an ossuary and presents Albrun with the skull of her mother. Even John Calvin at his most dour would have baulked at such ascetic joylessness.

How much Hagazussa can be recommended depends very much if your tastes merge in some theoretical Venn sweet spot between slow cinema and folk horror.  If The Witch was just too fast-paced for your tastes, then you may be in luck. If you’re into buboes being furtively prodded with ecclesiastical solemnity by a frowning cleric, or a woman pissing on to a dead rat then Hagazussa is definitely the film for you. Many will find themselves willing a recognisable narrative or structure onto Albrun’s story, but Feigelfeld shrugs off all expectations, occasionally frustratingly. Body horror, ghost story, revenger’s tragedy, and nightmarish psychedelia are all glanced at and discarded in favour of pure atmosphere and mythic esoterica. Albrun remains unknowable and ambiguous to a fault, and that can be both a strength and a curse.